Note: this is written about normal times. With the pandemic closing schools and daycares a lot of parents have far less time than usual, and while we're lucky that this has not affected us it's not what I'm looking at this here.

When I compare my life before and after kids, the biggest change is probably how much less free time I have. Looking back at time tracking numbers (2011, 2015, 2017a, 2017b) the big change is having ~40% of my waking time be with the kids around. This is time I enjoy, but it's also time I'm using for very different things.

One place you can see this is in how much I've ended up writing. Very roughly, the more time I have with nothing else I need to do, the more I write. Here are monthly blog posts here over the years: 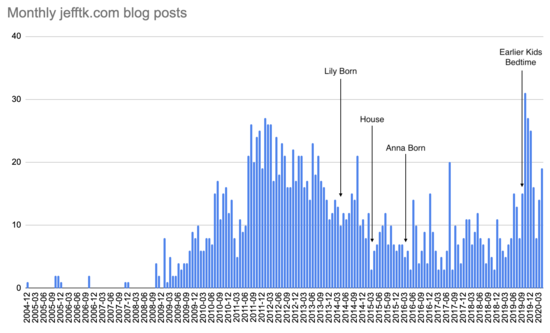 Initially, when Lily was born it didn't really decrease my free time very much. I had twelve weeks of leave from work, and a lot of my existing social time was the kind of thing I could do with a small cuddly kid on my lap. While I expected that this would mean less writing, it mostly didn't.

This changed when we bought a house that needed a lot of work. I think if we had bought the house first, however, I would be writing this the other way around: it was the combination of the two that took up all my previously free time.

Then we had a second kid, and while the house situation became less work kids started taking more time. This wasn't really a problem: I like spending time with the kids, and I also like working on the house. But it meant I had less slack and often had things I would like to write about (or other things I would like to do) that I didn't have time for. Spikes in the graph correspond to things like vacations, work travel, and unemployment.

In the last year I've been feeling like I have more time again. The biggest chunk of this has gone into musical exploration, but I've also been playing with a lot of other things. The two largest changes were wrapping up the last (so far?) major house project and moving the kids to an earlier bedtime when Lily started kindergarten. This is over a much larger background trend, though, with the kids (6y and 4y) getting more independent.

At this point they get themselves up (Lily when she feels like it and Anna when her wake-up light turns on), get dressed, use the bathroom, and go play downstairs. If we're not up yet they'll play together, and they know that if they have disagreements they need to resolve them without us getting involved. On a weekday evening or during a weekend they might want us to play with them, but they might also be happy to just play with each other. They need us much less than they did before.

If we did another round of time tracking now I'm not sure "childcare" would make as much sense as a category. In 2017 any time with the kids felt at least a bit childcareish, but now I can be playing piano in one room while the kids are playing a game in another. There are still times that require full attention, primarily around bedtime or when they're not getting along, but this is a much smaller fraction of child-time than it was.

Overall I'm enjoying having more time for projects, though I do miss some things about very little kids. I'm also really aware of how easy it is to overshoot and spend less time with your kids than you will, in retrospect, wish you had. So I'm trying to be intentional about being available for them.