After talking excitedly about how much better a wired connection has made my video calls, housemates who work remotely were interested in having ethernet to their desks. My dad lent me his RJ-45 tools, and I took a few hours on Friday to run cables.

I started with what ended up being the hardest cable, from a second floor bedroom down to the basement. Ideally I would have done the vertical portion when I had everything open doing the bathroom work, but at that point I still thought wired ethernet was obsolete. I was able to get it through the area around the plumbing stack using a snake, though, and it wasn't too bad. At the top I needed to drill horizontally through a thick wall, originally the outside of the house, now the wall between the house and the addition. I had an installer bit which turned out to have a cable-pull hole, which was really helpful. The desk was on the far side of the room from where the cable came in, and I decided to be lazy and run the cable along the baseboard, using 7mm cable tacks to keep it in place.

The tidiest way to do this would be to put an RJ-45 jack in the wall, but that's more work than I was up for. Instead I just crimped on a connector directly. Pass-through connectors are definitely worth it: it's much easier than getting the wires all exactly the right length, and I'm less likely to accidentally swap a pair.

The second run was from a room that's was an addition to the house. There's a crawl-space under it, but it's accessible only through a small window about six feet off the basement floor. I've been in it several times, and it's pretty annoying. I was complaining about this at dinner before running the cable, and Lily was very excited to learn our house had a crawl space. She wanted to go explore it, and wasn't willing to wait until tomorrow. I suggested she put on sturdy clothes, and while she was changing I hurried to go drill a hole and get the cable fed into the space. I lifted her up so she could climb in, and she was very excited to see what it was like. While she was in there she was happy to go get the end of the cable for me, which meant I didn't need to get myself in and out. 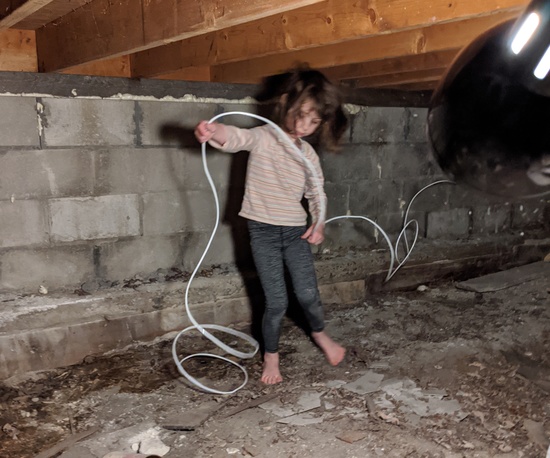 When I was putting her to bed that night I thanked her again, and she told me "I had a little spark of fear, but the bigger sparks inside me were adventure, excitement, and helpfulness."

The last cable run was the simplest. Julia's office is on the first floor, and is over the main area of the basement. I drilled a hole down where the baseboard meets the floor in an inconspicuous part of the office, and ran the cable over to the router. I had to try this twice, because the first time I hit a joist. At this point the router's four ports were full, so I hooked up a small gigabit switch I had around.

Overall it was a fun project and I think it will be useful to my housemates, though I think they're all still waiting for their usb-ethernet adapters to arrive.

←
Adding a Housemate Under Covid Kids and Time
→