I've been having trouble with my wrists on and off for years. The first time I remember, I think I was in seventh grade and I'd learned how to play a blues riff on the guitar that involved stretching widely while bending sharply at the wrist. It suddenly started hurting, and I needed to stop. This started a familiar pattern, where something would make my wrists hurt and I would learn not to do the thing that made them hurt.

Mostly this has been fine. I haven't had to give up things that are especially important to me, and I've been able to figure out how to do all the things I need to do. It did get pretty bad for me about two years ago, where I wasn't able to figure out any sort of mouse I could use for a while. Through all of this, though, I've been able to type, as long as I keep good posture with my wrists.

A week ago this changed. I'd been doing a lot of typing, and my wrists started hurting even when I typed. It didn't feel better in the morning and I decided I was going to try and spend the long weekend without typing at all or swiping on my phone. I put my computer away, set up voice control on my phone, and tried to give my wrists as much of a rest as possible.

Unfortunately, even after the whole weekend of resting, my wrists were hurting within about an hour of starting work on Tuesday morning. I set up voice control on my computer, but by this point I had been using my voice enough ("scroll down", "scroll down") that I was starting to hurt it as well, and I realized I needed to be careful with my voice too.

Normally when things happen in my life I tend to write blog posts right away, but I couldn't do that in this case since it was my ability to write that was affected.

My wrists might be doing okay enough that as long as I type primarily by dictation I can still use my wrists for navigation. Navigating entirely verbally is a lot slower.

One thing I found with dictation is that different systems vary enormously and how well they interpret speech. So far I've tried voice typing on my Pixel 3A, voice access on my Pixel, Mac OS's dictation, Mac OS's voice control, and Google Docs dictation. Of these, the Pixel's voice typing is by far the best. It runs locally on the device, is highly responsive, and it makes far fewer errors than the others. I'm dictating this blog post to my phone in Keep because weirdly enough that's the best thing I found so far. Later I'll clean it up on my computer with a combination of the keyboard and Mac OS dictation.

I'd really like to have something that combines the speed, accuracy, and language model of the Pixel's voice typing with the editing features of voice access. And on my computer not my phone. I haven't yet looked into commercial dictation software; it's possible that it would be worth buying something, and I suspect my work would pay for it.

One thing I found pretty useful is the boom mic from my headset that I wrote about earlier. Trying to use any kind of voice control while the kids are around talking only works if I am able to have it only pick up my voice and no one else's, and the headset can do that. I've done a decent amount of putting it around my neck and tilting the boom up to my mouth so I can leave my ears free. It looks a little silly: 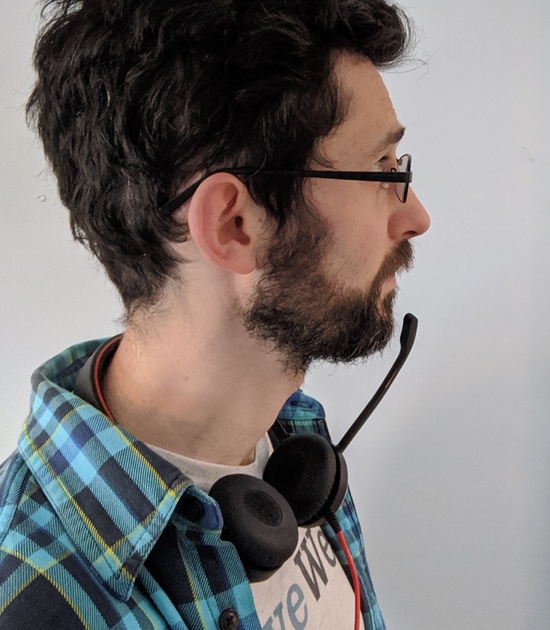 Another thing I found useful are the toe buttons I made for music. They present to the operating system as a game controller, and I've used a remapping program to make them trigger scroll up, scroll down, and, weirdly enough "oy". The latter is for Gmail. With standard keyboard shortcuts, "o" opens a message, and "y" archives the current message and returns you to the inbox. If you send one on the wrong screen it's ignored. Pressing the button then, opens a message if I'm on the inbox screen and archives the message if I'm currently reading it. [EDIT 2020-07-08: I've switched this button to "{", a shortcut I didn't know about before that means "archive this message and go to the next"]. This means I can read my email without using my hands or my voice.

I also made myself a phone stand, so I can lie on my back and read my phone. When my back wants to rest a little bit I like to lie down and stretch it out. I used to hold my phone above my face, but that actually uses my wrists a decent amount. The stand works with both portrait and landscape; in landscape one of the supports runs under my neck but doesn't touch my neck, head, or back: 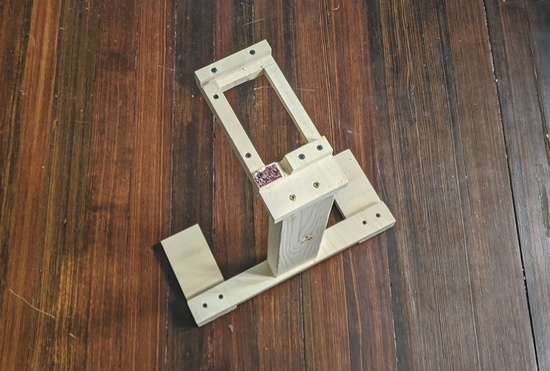 You might think building something like this would also be hard on my wrists, but they really only seem to mind repetitive motion, like mousing or, now, typing. Building things like this tends not to require that sort of work and so is fine.

Essentially all my recreational activities use my wrists repetitively, and it's been hard finding things that I want to do with my (new!) alone time that don't eat into my ability to get my work done by using up my limited amount of wrist-work for the day. Even reading a paper book uses my wrists some. I have a lot of posts I want to write but I don't yet have a good setup for them. I've been listening to an audiobook of the precipice but it's a weird combination of being somewhat dense and complicated while also mostly presenting a case for something I already agree with. Possibly I should watch TV, but having a rule with myself where I don't watch TV alone I think has generally been good for me.

In the past, mandolin and piano haven't hurt my wrists. I haven't got my mandolin out yet, and from the small amount of piano playing I've tried it's not clear to me yet whether it's a problem. I expect playing my hex keyboard would be a problem.

When things got bad last time I talked to a doctor and they thought I probably had a cyst in each wrist. I got MRIs done and they confirmed the cysts. [1] They recommended surgery to remove the cysts, but by the time we got to that point my wrists had calmed down enough that it didn't seem like it made sense. My model is something like, there's less space in my wrists then there should be, which is mostly a problem when I do things where my wrists are bent or otherwise reduces the available space. If I overdo it I get inflammation and then there's even less space. At this point I'm thinking surgery does make sense, but this is the kind of non-urgent outpatient medical treatment that we're not doing right now, and my doctor is furloughed anyway.

This is not the kind of post where I write about how is something all figured out, but I don't know how things are going to land. I'm doing OK overall, but I'm a bit anxious and worried about not being able to do things I want to do.


[1] Left: "At the point of maximal tenderness in the dorsal wrist at the level of the midcarpal is mild of soft tissue inflammation surrounding a small ganglion that measures 9 x 3 x 3 mm. It is deep to the extensor tendons and is similar in comparison to the other side but no definite point of origin is identified." Right: "The palpable abnormality corresponds to a small multiloculated ganglion arising from the scapholunate joint. It has multiple small septations and is deep to the extensor tendons. It demonstrates rim enhancement. It measures 8 x 4 x 11 mm." These are from September 2018.