Behind our house there's a small building: 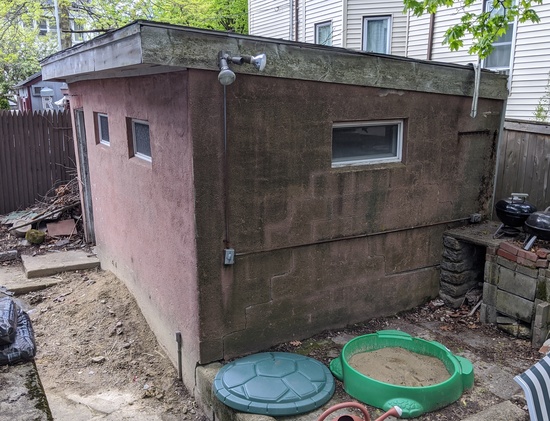 The previous owners had used it for storage, but it's in bad shape. There was a hole in the roof when we bought it, which has slowly been getting larger: 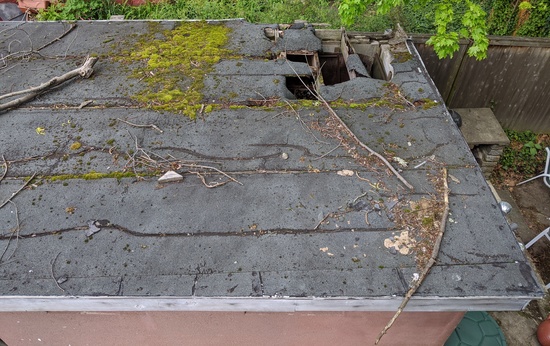 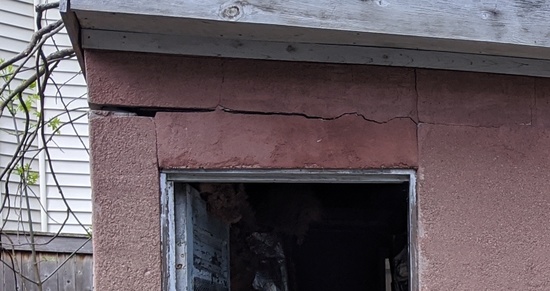 Though at least it doesn't look too different from 5 1/2 years ago:

It doesn't look like it has a proper footing. In this part of the country the top few feet of ground freeze every winter, so you need to go down four feet to get something stable. It looks to me like this is built on cinderblocks, and I would be surprised to learn that they dug a four-foot trench for them.

We've mostly ignored it since we bought the house five years ago; there was so much else that needed doing. Now that I have more time, we're starting to think about what might make sense to do with it. First step is taking measurements: 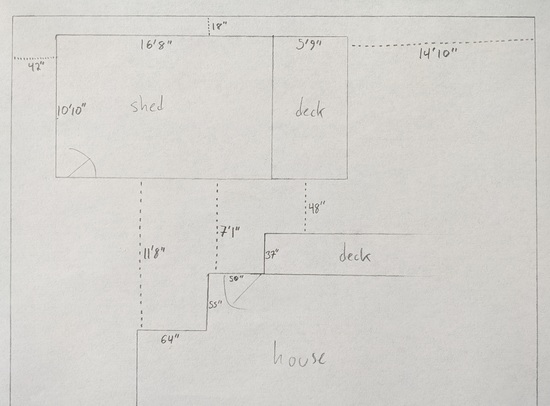 This is a scale drawing, because that seemed fun. I measure the external dimensions as 10'10" by 16'8", which is consistent with the 176 sqft that the assessor's database has for it.

The main options are fixing it, replacing it, removing it, and leaving it alone. Because of the foundation issue I suspect fixing it doesn't make much sense unless we just wanted to use it for storage though I could talk to some contractors. Replacing it could make sense if we could have something that was actually useful there. Removing it would give us more space in the back yard, though I don't know if we would do much with it. Leaving it alone keeps our options open a bit, though at some point it would start to get in danger of falling over.

Somerville adopted new zoning in December 2019. While the previous zoning would not allow most existing buildings to be built today, the revised zoning tries to be a closer match for the city. I think our current shed is allowed under 10.2.2.t:

A roofed structure used as a storage space. The following standards apply:

Except that it's too close to the rear lot line: I measure 18" from the back fence, and 10.2.1.e requires three feet.

There are two other categories we could potentially have a backyard structure like this under. One is an "outbuilding" under 10.2.2.o, which has a bit more permissive use:

A free-standing, fully-enclosed structure used for accessory vehicle parking, a home occupation, or as ancillary space for residential principal use including, but not limited to, a playroom for children. The following standards apply:

They define "home occupation" in 9.14.b, and say it includes but is not limited to "the office of an architect, attorney, engineer, instructor, realtor, sales representative, software developer, teacher and their substantial equivalents that do not involve persons regularly visiting the property for business purposes, but instead primarily involves the operator visiting clients off-site."

It reads to me like we could potentially replace the current structure with a building for a home office, and if we built it out of fireproof materials it could be as close to the lot line as we wanted. It's not clear to me whether a home office would be allowed to have plumbing and a bathroom, though that would be convenient.

Another interesting category is "backyard cottage" in 3.1.12, because it permits "one small dwelling unit", essentially a tiny house. It requires a lot depth of 80ft, and ours is probably a bit less than that. Our mortgage inspection plan is: 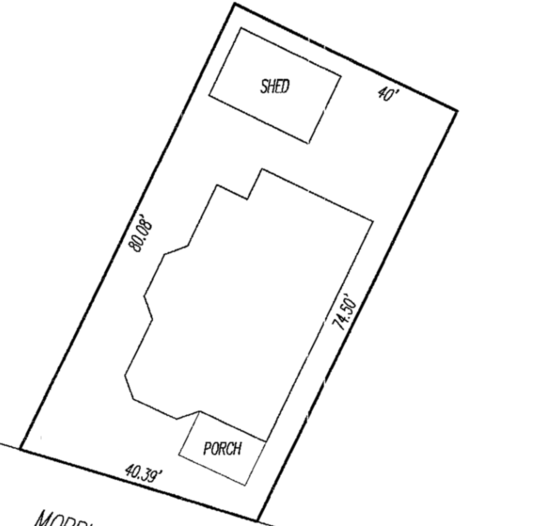 It's possible that in resurveying it would turn out that we did actually meet the requirements, or it may be possible to get a special permit to go slightly beyond them if our neighbors approve. The setback restrictions, however, are also limiting. It would need to be 3ft from the lot lines and 10ft from the house. This could look something like: 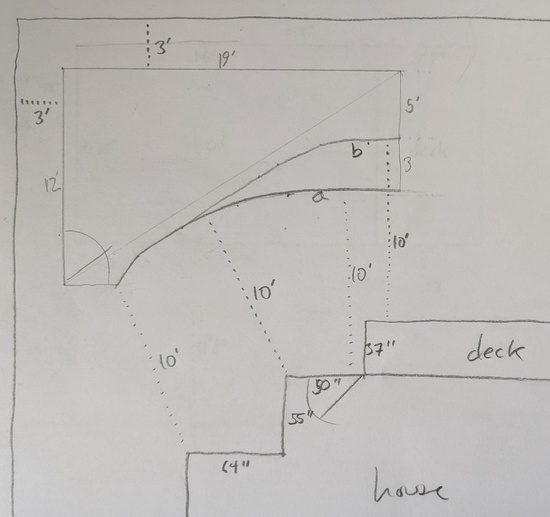 This is very small, at around 135 sqft for the first floor, though tiny houses are often even smaller. It looks to me like the 2015 building code does now allow this, with the removal of R304.1.

Another restriction that could be tricky is that 3.1.12.e requires "a three foot wide paved walkway capable of allowing an ambulance cot to be wheeled to and from the Backyard Cottage." Our current driveway configuration wouldn't give enough space for this, though we could potentially move the driveway right a foot or so to make room for a walkway.

The additional flexibility of having it be legal for living in makes me think this is probably worth looking into more, even though my guess is that it doesn't work out. There's also some chance that rents are low enough post-covid that this sort of project would only make sense if it could be done cheaply.

I think the next step is to talk to the city planning department to make sure we're not missing important constraints.