Sometimes I tell the kids "sorry, I can't do that with you right now, I'm writing a blog post". A few months ago Lily (then 5y) came up to me and asked if I would help her write a post. We sat down on the couch, she dictated, I typed, and out came a post about bridges. Since then she's asked me to record about a dozen more. 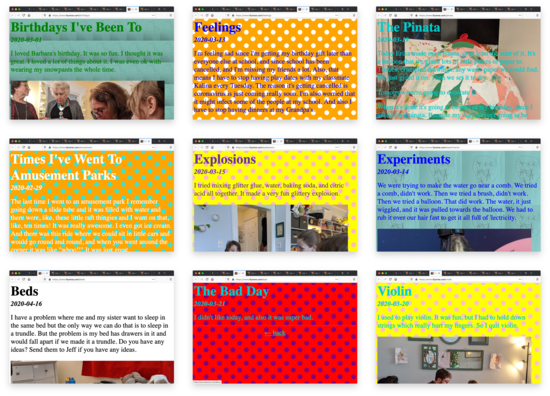 Some of the posts are fully initiated by her (podcasts) but other times I'll ask if she'd like to write one with me. Perhaps we've just done something interesting together (static and balloons), or maybe she has something she wants to tell people about (tricky situations with my sister).

First she'll dictate the post body, then I'll ask about a title, then I'll ask about colors. Sometimes her color preferences can be a bit much, and I kind of regret learning the CSS for polka-dotted backgrounds. I'll ask if she wants any pictures on the post, and we'll either look through my photo archive or go take a picture of something. I'll usually take pictures during activities if I think there's a chance she'll want to use a picture in a post; at some point that kind of anticipation will be her job, but not yet.

When it's done I'll date it and add it to the index page. Lily will often ask me to post it in the Anna and Lily Facebook group. Yesterday she wrote something and wanted to post it to LessWrong so more people would see it. I expected she wouldn't get the same kind of reception there as on Facebook, but I helped her make an account. She had trouble deciding what she wanted to write, though, and didn't end up posting anything.

Her younger sister Anna has written several as well, though her attention span is a lot shorter and the posts are less coherent. She clearly misses her cousins a lot.