We used to make land. We built long wharves for docking ships, and then over time filled in the areas between them. Later we built up mudflats wholesale to make even larger areas. Here's a map of Boston showing how much of the land wasn't previously dry: 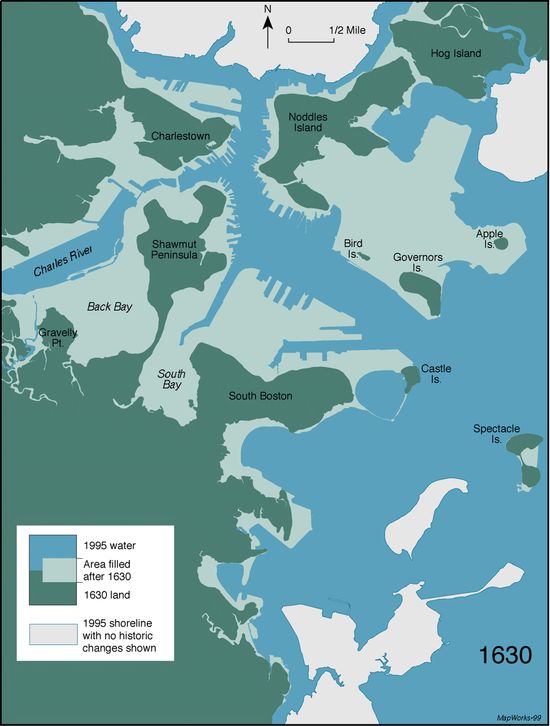 (Map reproduction courtesy of the Norman B. Leventhal Map & Education Center at the Boston Public Library)

In expensive areas, converting wetlands and shallow water into usable land is a very good thing on balance, and we should start doing it again. To take a specific example, we should make land out of the San Francisco Bay, at least South of the Dumbarton Bridge: 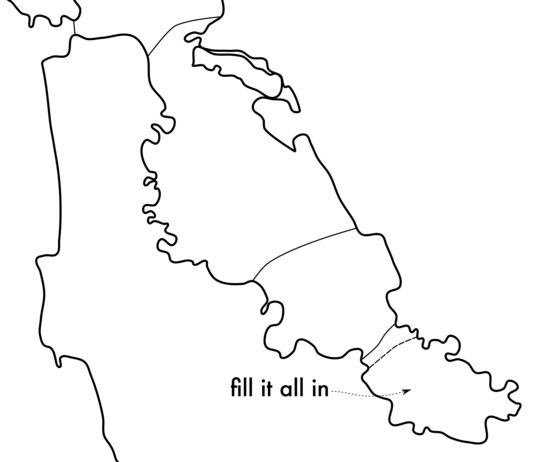 This is about 50mi2, a bit bigger than San Fransisco. This would be enough new central land to bring rents down dramatically across the region. It can be built to a higher density than SF, because no one is having their neighborhood Manhattanized. Millions of people could live there.

This would be an environmental disaster. Some of that area is a wildlife refuge, and all of it should be protected.

The world is very large, and cities are a very small portion of it. The land we set aside for animals should be outside of cities, where far more land is available at far less impact to people.

Sprawl has a much larger impact on wildlife than infill, and allowing people to live closer in is the most powerful way to address sprawl. Additionally, sprawl leads to much higher carbon emissions through less efficient transportation. While development of the Bay would be harmful to the specific animals that live there today, it would be better for animals (and people) overall.

The Bay is beautiful and this would ruin it.

This part of the Bay is primarily industrial salt ponds.

This is just a few miles from a major fault line, and made land can liquify in earthquakes.

You do need to take fill into account to build in an earthquake-safe way, but modern engineering is well up to the task.

Traffic would be even worse.

The biggest contribution to traffic in the Bay Area is that people aren't allowed to live where the jobs are. The second biggest is that BART doesn't have enough coverage to make living without a car practical in most of the area. This would help with both of these, since this project would allow millions of people to live closer in and would easily fund massive subway expansion.

Wait, how many people are you saying would live there? 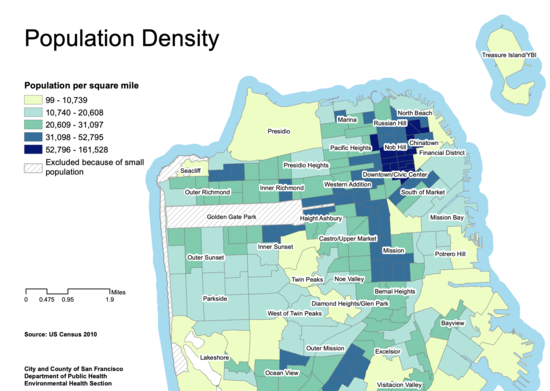 This would undo decades of work aimed at preserving the Bay and restoring its wetlands.

Building dikes to keep the water out is very practical. A third of the Netherlands is below sea level, with most of that expansion happening before modern technology. By decreasing the amount of coastline in the Bay this project would make it easier to prevent flooding caused by sea-level rise.

Didn't someone already propose this decades ago?

The Reber Plan of the 1940s was a similar large project planned farther North, primarily for the East Bay. It was intended to both make land and create freshwater lakes, and testing with a scale-model showed major issues. This plan is much simpler, and more similar to past successful land reclamation projects.

There's not enough water for the people we already have; what will people drink?

There's plenty of water already, we just need to prioritize people drinking it over crops, which would happen naturally if we priced it. But even without that, desalination is cheap enough that a person's daily water use would be a matter of cents.

Is this a serious proposal?

Yes. We should do this.

(I previously suggested this kind of infill development with Boston's Fort Point Channel.)