Our house has a dinner rotation, with each of the six adults typically cooking once a week. Last week Lily (6y) asked if she could take a turn, and I offered to help her. Before I let her sign up I talked her through what this would entail: enough food for eight people, two of them vegan, with at least one protein, starch, and vegetable. She described what she was thinking of cooking, I pointed out issues, she tweaked it. She eventually ended up with rice, beans, cheese, sliced tomatoes with garlic, fresh spinach, and avocado sauce.

When she went to sign up she was sad to see that all the slots were full several days out, but wrote her initial on the next open day.

When I came downstairs from work on the day she was going to cook, she was very excited to start right away. She wanted to start with the avocado sauce, but I described how the rice and beans were going to need some time on the stove and how we should start with them instead. I would have preferred to leave this entirely up to her, but if dinner ended up being late that would be kind of annoying for our housemates.

Lily measured out the water for the rice and asked me to put it on the stove. She wanted to put the rice in right away, but I described how it tastes much better if you bring the water to a boil first. 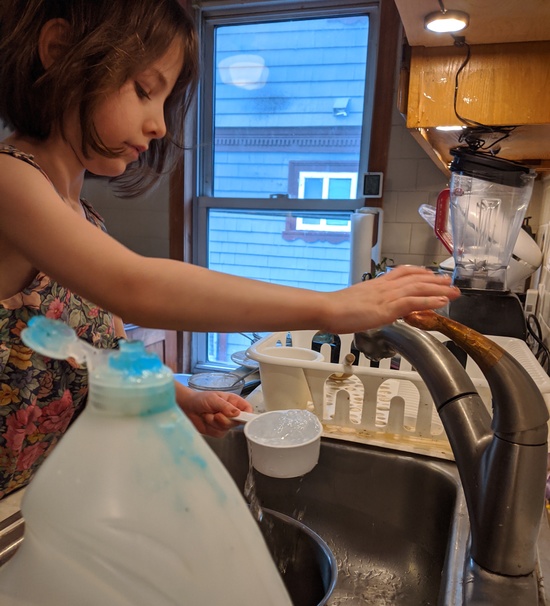 Next we went down to the basement and got a #10 can of black beans. Normally we would use smaller cans, but we've been buying from the commercial food supply chain. She wasn't able to turn the can opener, so I did it for her.

I suggested we cook some onions to put in the beans, which she was ok with as long as I cut them up, since she didn't want to be using the sharp knife. I sliced some onions and put them on low heat with oil.

She wanted to start the avocado sauce again, and now I agreed it was time. After picking an avocado and asking me to cut it in half, she scraped it out into a bowl. I think she remembered our au pair, Erika, making it, because I have no idea what to put in an avocado sauce. She put in water, lime juice, and salt, and then asked me to blend it. She told me it was ready, but I suggested she taste it first, after which she wanted a bit more salt.

For the cheese she asked me to get out the mozzarella and the grater, and she grated a small plateful.

For the tomatoes she picked some out of the fridge, washed them, and cut them with a butter knife. She got our the minced garlic and put some on, though if I had been watching more closely I would have recommended she use much less garlic.

At this point the water was boiling so we put in the rice, and the onions were ready to add to the beans. We spent some time spicing the beans, which was more me cooking and her helping than the other way around.

I asked if there was anything left, and she remembered she'd wanted fresh spinach. We picked out a bowl from the hutch, and filled it with spinach. 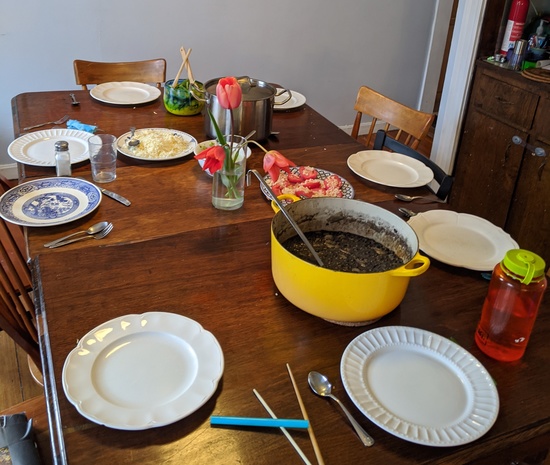 Lily asked me to @channel and was very proud as people came up: 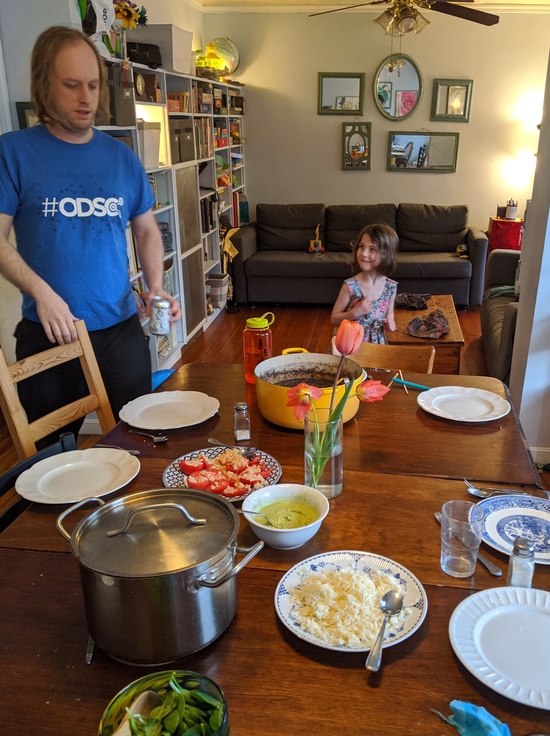 The avocado sauce was very popular:

The raw tomatoes with lots of raw garlic, less so: 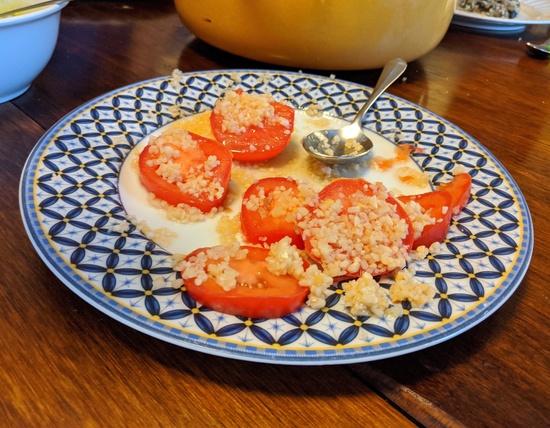 You can also read Lily's writeup.