On July 1st I discovered a puddle of liquid mercury in our house. It was the evening before the holiday weekend and I was preparing to do some more demolition for the bathroom I've been working on. I was putting down plastic to make cleanup easier, and when I got to the corner there was a dusty little puddle. That seemed peculiar, so I poked it. It wiggled. I knew exactly what liquid moves like that. Completely dumbfounded, I went downstairs to wash my hands.

A bit of looking online, it looked like I was dealing with a spill of about a tablespoon, and following their advice I called the fire department. And posted on facebook. Some firefighters came out, poked at it with a stick, and said "yup, that's mercury". They called out their chief, who also poked at it and agreed it was mercury. Around this time we decided it was getting late and our 1.5 year-old daughter should get to bed, so my wife, daughter, and one of our housemates went to my dad's house to spend the night.

A truck from the DEP showed up with hazmat suits and a mercury vacuum, and some firefighters suited up and started seeing if they could clean up the spill. After a couple hours they realized there was too much, and a civil engineer with the DEP told me that we would need to hire hazmat cleanup contractors to finish the work. A representative from the Somerville board of health officially closed the house, and my other housemate and I went back to my dad's for the night.

The next morning (Thursday) I called around for contractors and found Clean Harbors. They were able to start work that day, and by the end of the day they measured levels of 0.0 everywhere outside the room with the spill. They were using a Jerome meter, which can only measure down to 3000 ng/m3 when the safe indoor limit is 300 ng/m3, but they were pretty sure the effects of the spill was limited to that one corner now.

Friday morning was a holiday for them so we would have needed to pay big overtime costs to get them to come out and finish, but they did send me a letter (pdf) to give to the Somerville Board of Health:

Clean Harbors responded to a mercury spill @ the above address on 7/2/15. Our Foreman George Falzarano who is experienced with a Jerome meter took readings and the first and second floor were reading 0 on the meter. The third floor also read 0 except for the small room that had the initial spill. There were still areas in that room that were .037 milligrams per cubic meter. That area is still contaminated and will be cleaned on Monday. These readings were taken on 7/2/15 at approximately 5:40PM

I got the letter just after noon that day and immediately called the city to ask if we could go back in the house, as long as we stayed out of the contaminated room. Unfortunately this being the Friday of the holiday weekend they closed at noon, and I was too late.

First thing Monday morning I called them up again, forwarded them the letter, and they cleared the house. Our housemates decided to move back in that afternoon, while we decided to wait until the cleanup was done, which we thought would be just a couple more days. Clean Harbors worked all day Monday, told me they making good progress.

That evening I got a call from our housemates. They'd been sweeping up in the kitchen and they'd noticed mercury in the dustpan. I drive over and pick them up, and they come back to my dad's house, this time bringing their cats.

The spill turns out to be much larger than we'd thought, far more than a tablespoon, more like several cups. Over the next few weeks the contractors keep working on the cleanup, carefully removing floor and wall to get up any they can. They end up needing to take down the kitchen ceiling, below the spill, and remove the tiles from the kitchen floor. All contaminated. Even the fridge has to go.

Eventually they think they've got it all. They bring in their super sensitive Lumex meter which can measure down to 200 ng/m3, remove a few more contaminated things, and then they're hopeful they're done.

The next step is an 8hr air quality sample, with the house sealed up like it would be in wintertime. I call around for a hygenist to make the sample, and the only people I find who are willing to do residential work are OccuHealth. They send me a proposal (pdf), we schedule a testing date.

I close up the house tight for 60+hr, the test takes a day, then there's lab time, and we eventually hear back on September 7th that levels are below the threshold of detection (pdf). It was a long time coming, but the house is now definitely mercury-free!

So where did this mercury come from? The largest concentration was immediately below a pipe in the attic that was probably for an expansion tank for the original heating system. The house was built with hot-water radiators, but this was back before pumps were cheap enough to put in houses so it was a gravity based system. Hot water rises relative to cold water. This works better at hotter temperatures but you can only get water so hot before it boils. Unless you pressurize it! So people would use a mercury seal to put pressure on the water, allowing the system to run hotter without boiling. This is a "heat generator," and was the first product of the Honeywell corporation. 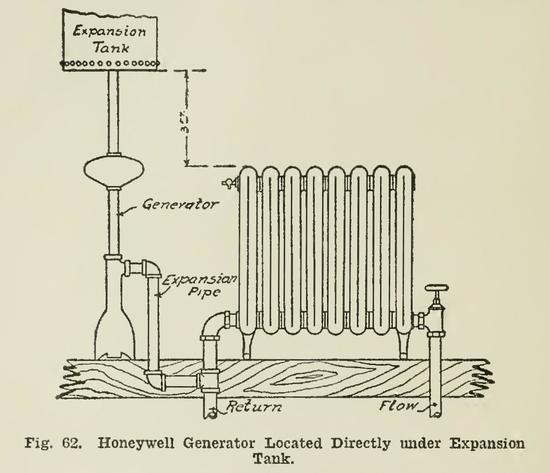 In the 1970s, when this system was converted from gravity-circulation to pumping, they apparently removed the heat generator, and spilled the mercury all over the floor. It ran under the floor, along the subfloor, seeped through the ceiling below, and got absolutely everywhere. And there it sat, mostly undisturbed, until I found it when doing demolition for the bathroom.

Surprisingly enough, I actually took a picture of the mercury under the floor without realizing it when I was doing something else. I was sticking my phone through a gap in the subfloor-boards to try and get pictures to show me where an old gas pipe (used for lighting, way back when) went. After learning about the spill I went back, and here's a picture, cropped and zoomed: 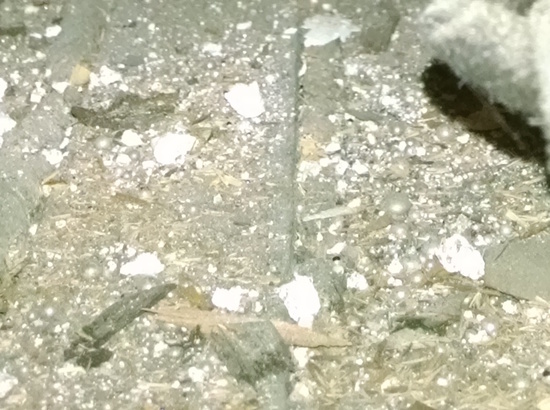 It's not obvious at first, but see those little spheres? So many of them? They're not shiny like mercury usually is, but that's what they are. They're so old the mercury on the surface has oxidized, which means a very long time undisturbed. The rows in the picture are plaster sticking up between two strips of lathe, so about 2 inches apart: these are very small drops of the stuff.

Overall this was pretty expensive: $38,491.54 for the cleanup (20 working days: invoices 1, 2, 3), $1,343.75 for the air quality testing, $1100 to replace the kitchen ceiling, [1] $121 to replace the kitchen floor. Plus we needed a new fridge and had to replace other contaminated items. And we still don't know how much the bill for the hazmat disposal will be, because the barrels are still waiting for pickup. Call it $50k total?

You might be wondering: who paid for all this? Unfortunately, us. This is the sort of thing you might hope that homeowners insurance would cover, but at least ours excludes pollutants. There is an exception for liquids emitted from a heating system, but they denied the claim (pdf) saying:

The damage from the mercury was not from a [spill] during the policy period and as such, we will not be able to provide coverage for your loss.

I talked to a lawyer, who didn't think we'd be likely to succeed if we tried to get the insurance company to pay anyway. They did think whoever owned the house at the time of the spill would be liable, but it would be hard to prove that the spill happened at a certain time and they may not have the money.

We're back in the house now and there's no more mercury, but it's really such a shame that they didn't clean it up properly at the time of the spill.

(One thing this illustrates is that the downside risk of owning is much higher than with renting.)


[1] I could have done this myself, but ceiling work is pretty difficult to do well, or even to do at all.