Since getting a house much of a year ago I've put in a few different types of flooring. I thought I'd write a bit about what we decided to do and why.

When we bought the house many of the rooms were wall-to-wall carpeting. After getting down to the wood and pulling the staples out I screened it, filled big holes with wood filler, and put down oil-based polyurethane. More details here. After a few months of living it looked like this:

Here's a close-up of a place where I used wood filler: 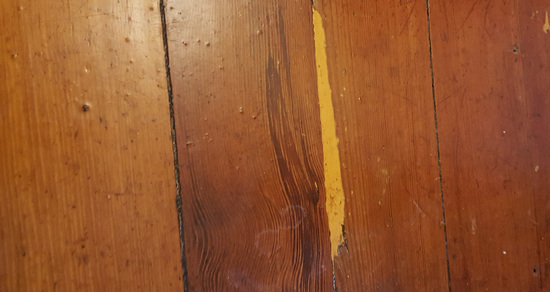 In the room that I was planning to put down plywood boards I've now finished. I bought hardwood plywood from home depot, and cut it to 5.5" width with my dad on his raidial-arm saw. In retrospect I would have had Home Depot do the cutting: they charge $0.50/cut, but it was slow going doing it ourselves and our cuts were bowed slightly where the fence on the saw had some give to it. I used subfloor adhesive (from a caulking tube) and finishing nails to hold it down, and was reasonably happy with how it went in. Before putting on the poly I sanded it lightly with 80, 120, then 220 sandpaper. I did this by hand, which was way more work then it needed to be, especially given that my dad had a finishing sander I could borrow. The poly went down well, and I'm pretty happy. Today it looks like:

The kitchen had peel-and-stick vinyl tile over plywood. This wasn't in that bad shape, but it was super ugly, so we decided to paint it blue. This was ok, but it was kind of sticky, which meant it was hard to clean.

When cleaning up from the spill the contractors needed to remove the tile, and we decided to put down solid-color black and white vinyl tile in a checkerboard pattern. I did some sanding to level the plywood subfloor in especially uneven places, but in retrospect should have done more: there are a few places where the new tile is cracking a bit. When it gets really bad I'll pull up those tiles, sand the floor under them flat, and put down new ones; we have a lot of extras. Putting down the tiles in the first place wasn't too bad: get the floor really clean, start in the middle and work out, and align them very carefully. I used a paper cutter to cut them to size, which you need to do at the edges of the room. I'd say that for this 15x12 room the edging took about as long as the whole middle.

The room sizing was awkward, and meant we needed to buy more flooring tile than we needed: it came in boxes of 45, and we needed about 120, half black, half white, so four boxes.

Here's a close-up of the place where the subfloor was uneven and I didn't sand it enough:

The last flooring I was working on was the entryway. It's an old parquet floor, that had had its poly worn thought in many places. You're supposed to sand down to the wood if you want these to look their best, but (a) sanding is hard and (b) I don't know how many more sandings are left in that floor, so I decided to do another screen and recoat. I did the stairs at the same time. This time I used the finishing sander, which was definitely worth it; much easier. 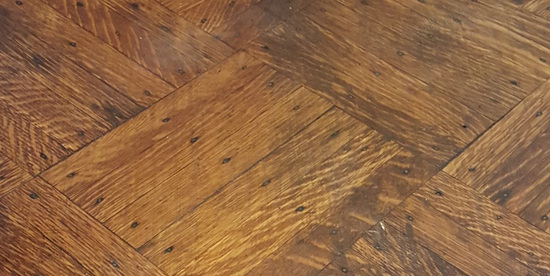 The part of the floor that had been under wall-to-wall carpeting was in better shape: 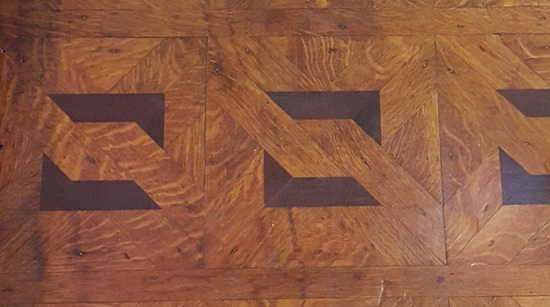 These were all on the cheap end of our options. Costs, fully inclusive, but ignoring our labor time and the time of the various people who helped out.

Ignoring labor makes some labor-cost tradeoffs a little confusing. For example, I rented a floor polisher for screen and recoat #1 because I was doing about five times as much area. This was definitely worth it compared to doing it all on my hands and knees with a much slower tool, but confuses the costs for otherwise similar operations.