Julia and I bought a house two months ago, and we've been working on getting it ready to move into. It's needed quite a bit of work, which we've been trying to do ourselves as we can. Part of what has made it hard is finding the time: I've been away many weekends with the Free Raisins and the rest of the time one of us is working while the other is watching Lily. Most days there's Lily's two naps to work on the house, one for Julia and one for me, and that's about it. As we get ready to move in, though, I wanted to think back over what we've done so far and what we still need to do.

The house had green wall-to-wall carpet over most of the rooms when we bought it. The carpet wasn't in terrible shape, and could have lasted a little longer, but we (a) really don't like that kind of carpeting and (b) didn't want to redo it some time after moving in. The "we should do it now because its easier" keeps coming up. Ripping the carpet up was actually really satisfying, in the same way painting large walls can be: you make pretty quick progress. In most areas the floor under the carpet was the original wood, in pretty good condition, but in the hall and on the back porch there was very sad linoleum tile over hardboard. I ripped that out too, and while the hall was the nice floorboards one of the bedrooms, originally a back porch, is plywood.

After getting the carpet up and removing all the last tacks and staples I decided to screen and recoat the floors. If you have a wood floor with polyurethane on it and either the poly is in bad shape or you want the floor to look completely new you can sand the floor with a drum sander before putting on new poly. I didn't want to do this, because it permanently removes part of the floor (so you can only do it a few times), it creates an incredible amount of dust, and it's very difficult to move the drum sander properly and not gouge the floor.

Another option, if your current finish is wearing away but not chipping or peeling, is to screen it and put on additional poly; the screening roughs up the surface the new poly will bond well. I rented a floor polisher from Home Depot (though I think a floor maintainer would have been better; spins slower) and went over all the wood areas with screens at 60, 80, and then 100 grit. I vacuumed, let the dust settle overnight, vacuumed again, mopped, let dry fully, then put on four sequential coats of oil based polyurethane. Four is really a lot, usually you would do two, but the longer it is before we have to do this again the better. One nice thing about this is that if you get the timing right you can put on additional coats without sanding in between, though this was a little awkward as I ended up needing to wait until midnight to put on one of the coats.

The underlying poly was oil-based, so we needed the additional layers to be oil-based, and even with the windows open for several days it's still very fumey. I'm glad we're doing this before we've moved in. (And this is why I have time to write a blog post: we want to keep Lily away from the fumes, so I'm at our current place while she naps with no work I can do on the house.)

The room that had carpet over linoleum over plywood still needs a floor, and I'm planning to make one out of hardwood plywood. I've bought the plywood and cut it into boards (a lot of ripping with my dad on his radial arm saw) and when I get a free day I'm going to nail it down. Then I might stain it, might not, and put on several coats of polyurethane. The main downside to plywood as a flooring material is that the top layer is very thin, just a veneer really, which means you can't sand it and refinish it like you can with solid boards. So we'll have to keep an eye on it and make sure they poly stays in good shape.

One annoying thing about this is that the molding is all at the right height for a carpeted floor, and the carpet is gone, so there's now a 3/4" gap between the molding and the floor. I need to either move the molding down or add new molding as a second layer. Both of these have the potential to be annoying, as the floor isn't completely level, so I might need to cut it to follow the curve in the floor.

The kitchen floor is linoleum over hardboard over the original floor, and we had to decide what to do with that as well because the linoleum is both ugly and coming apart in a few places. We decided to patch those places, degloss the surface, and paint it all blue. Redoing the floor there properly would require removing all the cupboards and appliances, and while I think we will want to do that at some point it's not worth doing right now because it's in reasonable shape.

Another thing we needed to deal with was the electrical system. The basement and the tenants' unit on the first floor are all fine, but many of the circuits in our unit are aluminum. There was a short time in the 60s-70s when copper got expensive enough that they started using aluminum for residential wiring, but it turned out to be tricky enough to work with that they banned it. Existing wiring is grandfathered in, but if work wasn't done properly it might not be safe. After talking to several electricians I decided to bring someone in to go through all the plugs and "pigtail" them by running a short segment of copper just from the plug to the aluminum circuit wiring. This means that the most vulnerable wiring, the wire right at the plug, is copper, and it means that you can make the right kind of copper-aluminum bond at the end of the pigtail, dealing with the dissimilar metals issues. We also had them replace most of the light fixtures while they were doing this.

The foundation was also not in good shape. It's a pure fieldstone foundation, which is a unusual for something built as late as 1920, which means it's large stones with mortar between them. Over time the mortar wears out, falls out as dust, and needs to be replaced. If you don't replace it rocks can come lose and eventually the foundation can start to collapse. According to the mason we hired, this foundation had never been repointed (removing the mortar and replacing it with fresh) just patched in a few places where the stones had started to come lose. There was one small area we were particularly concerned about where the stones had started to shift a little, but it turned out the entire basement needed repointing.

This was harder than it could have been because several parts of the basement were partly finished, with old partitions and even the remains of a sauna. This was all stuff that needed to go anyway, because it had gotten moldy over time, and we ended up hiring people to clean it all out. This was something we could have done ourselves, given the time, but there's enough else we needed to do that it made sense to hire people to do it so the mason could start on the foundation sooner. This involved getting a dumpster, which was good because I had a lot of carpet from before that we needed to get rid of as well.

The roof also is in poor shape and needs dealing with. One side is ok though getting old, while the other side is completely ready to be replaced. After talking to several roofers we now have one lined up, though it's hard to know when they'll get to us.

The old trim around the windows and doors was in poor shape as well as being an unusual choice to begin with, so we decided to replace it. We bought belly molding from Home Depot, cut it to length, and nailed it in. It was not as hard as I expected it to be, though still tricky to get everything the right length and lined up just right. Julia's dad came up from Virginia to help paint, and ended up doing a lot of the molding as well.

There's been a lot of painting, almost all Julia's doing, and there will be more. So far the common areas and our bedrooms are done, but the two rooms that will be David and Allison's still need doing, and a lot of the baseboard trim needs touch ups where I got polyurethane on it.

The molding that we did decide to keep was all unpainted and we wanted to paint it white. This meant sanding it so the paint would adhere to the wood, and then two coats of white paint. The floor-level molding wasn't too bad, but the crown molding, along the ceiling, is a bit of an awkward angle to work on.

With all the things that need doing its a little silly that we're putting more on our plate, but again if we want to do something its less disruptive to do it now. So we decided to put in a bathroom on the third floor. Currently the house has one bathroom in each unit, and our unit is going to have enough people (5+) that a second bathroom would be nice. I talked to plumbers and we're going to run a new sewer/ventilation stack up from the basement through to the roof, along with hot and cold water. I drew up some plans to apply for a permit, which we've got now: 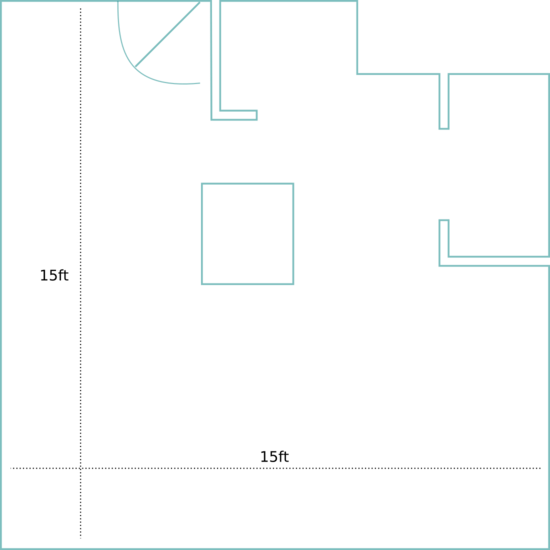 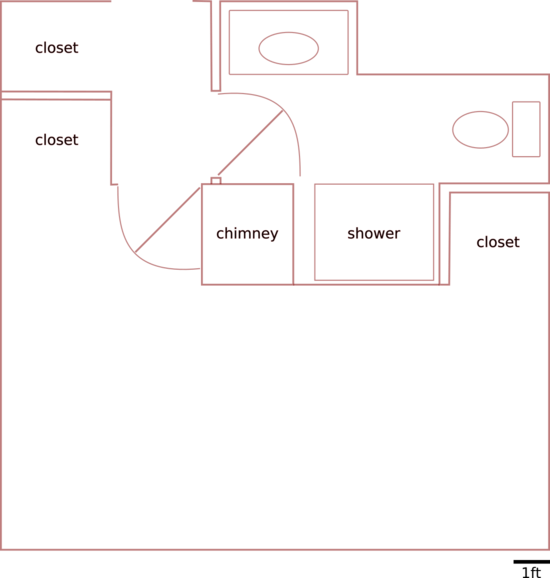 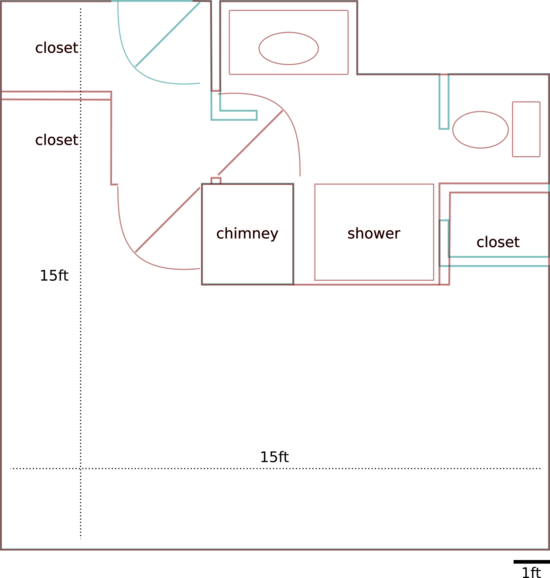 I'm planning to do the carpentry myself, hiring people to do the electrical and plumbing. This doesn't keep us from moving in, though, as aside from running the stack, which won't take too long, we can confine the construction mess to one bedroom and just not use it until the bathroom is done.

This is not a complete list, and there are many more things we need to do and haven't done yet, but this is a lot of why I haven't been writing much lately.

(For a lot of this work on the house you could say it would make more sense to hire someone to do it, but one thing I really like about doing the work is then we understand what needs doing later when it needs maintenance. It's kind of similar to Linux really: when I first started trying to use Linux I installed a distribution where it was all set up for you, but then when there were things I wanted to change or needed to fix I didn't know where to look. Then I switched to Gentoo where I did a low level installation and had to configure everything by hand (with good documentation). It was much more work, but I understood things much more thoroughly afterwards.)