Consumer Reports recently tested a bunch of dark chocolate for lead and cadmium, and found that:

For 23 of the bars, eating just an ounce a day would put an adult over a level that public health authorities and CR's experts say may be harmful for at least one of those heavy metals. Five of the bars were above those levels for both cadmium and lead.

If you regularly eat chocolate, how worried about this should you be?

Consumer Reports used the limits from California's Prop 65, which you may recall from the "this thing contains chemicals known to the state of California to cause cancer, birth defects, or other reproductive harm" warnings that are all over everything in CA. For both lead and cadmium Consumer Reports used the reproductive harm "maximum allowable daily level" (MADL), which are 0.5 µg/d and 4.1µg/d respectively.

CA calculates these limits by looking at studies that try to find the highest dose that has no observable effect (NOEL, "No Observable Effect Level") or the lowest dose that does have one (LOEL, "Lowest Observable Effect Level"), and estimating an effect threshold. Then they divide by 1,000 (as required by the original proposition text) to get the MADL limit. For example, here's the process they used for cadmium (pdf).

A safety factor of 1,000 is large (though not nuts for converting from a single dose to an ongoing exposure), so it's not surprising that CA's limits are tighter than you see elsewhere. For example, the FDA's limits for lead are 3µg/d for kids and 12.5µg/d for women who might become pregnant (pdf), 6x and 25x the Prop 65 lead MADL. The FDA translates this into a limit of 0.1 ppm for candy likely to be consumed by small children, 5.7x the level Consumer Reports used. [1]

Similarly, for cadmium the CDC reports that the EPA limit (which I can't find on epa.gov) is for food is 1µg/kg/d. CA used a pregnant adult weight of 58 kg in their cadmium calculation, so the equivalent from the EPA limit would be 58µg/d, 14x the CA Prop 65 level. Using 25kg for a child weight would give 25µg/d, 6.1x the Prop 65 cadmium MADL.

Putting these all on the same footing, assuming you're eating 1oz of chocolate daily: 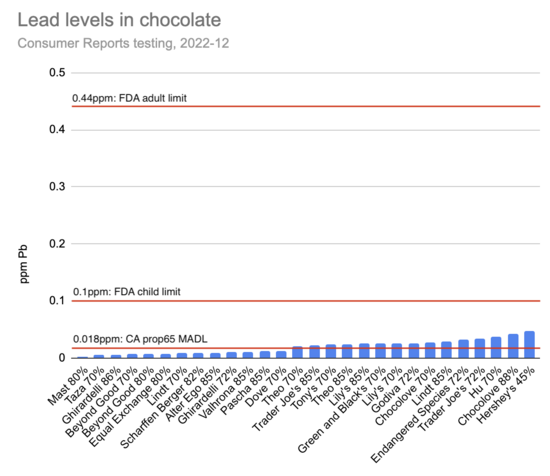 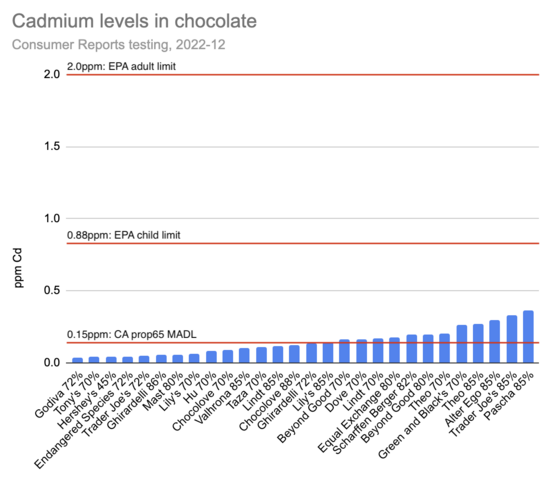 My overall interpretation is that while it's better to eat chocolate with lower heavy metal content, all things being equal, these levels are basically fine and it's not worth avoiding chocolate over. The Consumer Reports findings seem alarming only because dividing by 1,000 in determining CA Prop 65 levels gives a super conservative safety factor.

←
Boston Solstice Songs Not Getting Hacked
→