In an effort to reduce clutter, simplify setup, and avoid damaging my gear, I've packaged up my whistle synth and rhythm stage setup into a box: 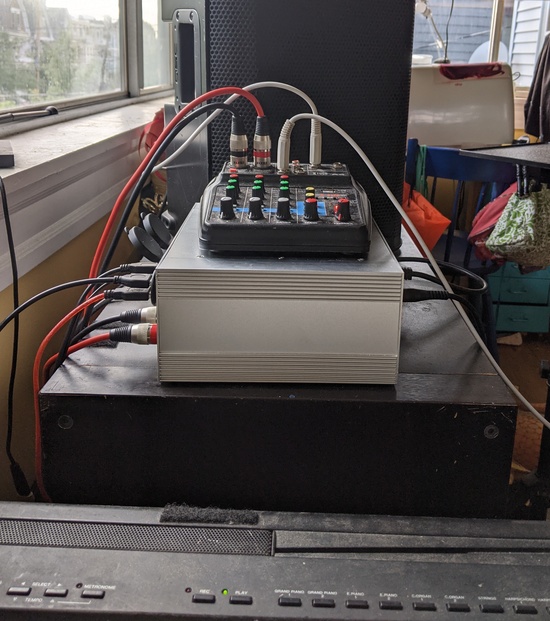 The box is aluminum, 10x8x4. I like working with aluminum: it's very strong, but it's soft enough to drill without too much trouble. I removed the front and back plates and clamped them between blocks of wood for drilling.

The DI is a Radial PRO D2. I removed the shell and reused the original screws to attach it to my case. I also carefully aligned it so I could reuse the existing XLR ports; 1/4" jacks are pretty easy but XLR is more hassle.

I should have included an ethernet port so I can reprogram it without opening it up. I may come back and add one.

It's very much a prototype: a production version of something like this would probably only be about 4" on a side. Combining existing parts does not minimize size or weight.

(In setting this up I moved my rhythm stage setup (github), which I essentially hadn't touched in a year, from a Mac to the Raspberry Pi. This meant porting it to Linux, which meant learning how to do MIDI on Linux. It also meant dropping a few sounds which aren't open source only sort of support Linux, primarily the sax and trombone. Since I'm no longer playing the Axis 49 because of wrist issues, though, this isn't actually giving up very much.)

Update 2022-08-17: The "all in a box" idea didn't work very well: it was much larger and heavier than just the pieces individually because of the internal cabling to connect jacks to inputs. Additionally, connections would come loose inside the box, requiring me to open it up and fix, often at gigs. I gave up on this about six months ago, though I'm still running the software on a raspberry pi, and I'm very happy with that.