In controlling my rhythm stage setup I have been bringing instruments in and out by pressing buttons on my axis 49. It has plenty of buttons, but needing to press them with my fingers doesn't combine well with playing mandolin. So: toe buttons!

The most common tool musicians use seems to be the FCB1010. Not only does it have twelve buttons it has two expression pedals. While this would be nice, it's too bulky for me: I already have many things under my feet so I would need to move my feet too far to press the buttons. So I built something instead: 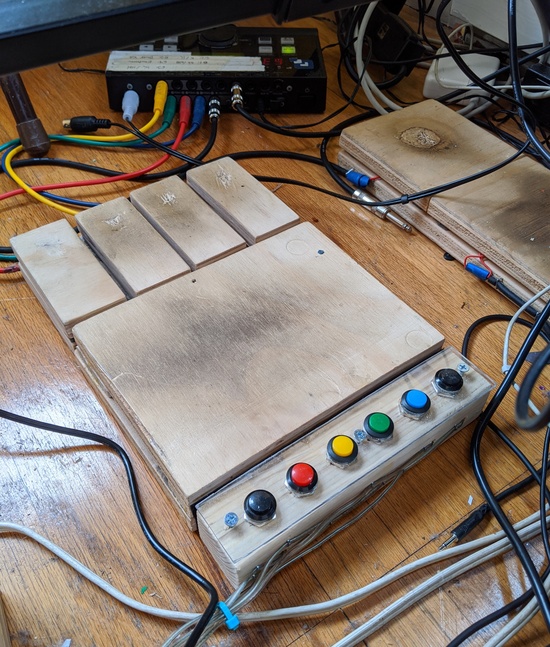 This is my footboard v3 with its four velocity sensitive pads, but now with six multi-color switches within easy reach of my toes. It's velcroed on to the main section and connects via USB:

I made it out of momentary push-button switches and a DIY arcade kit. It presents as a USB game controller, and I've modified my software to read from it with IOKit calls (110743b4e).

I cut a block of wood to the right size, leaving the tops of the buttons even with the footrest, cut a piece of plexiglass to match, and cut through them both with a bit the same diameter as the barrel of the switches. Then I drilled a smaller hole into that cavity for the signal wire to come out. Here's two of the switches in place: 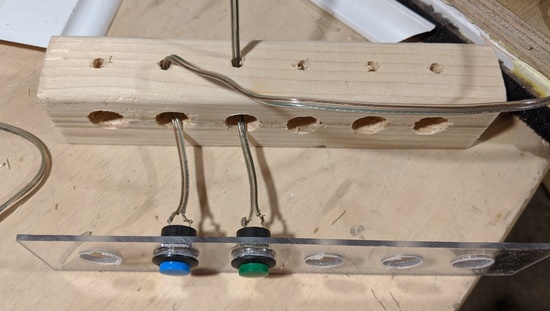 I built a small box to house the USB controller out of 3/4 plywood. I didn't glue the top on, in case I later want to open it up to add leads for additional switches. Here's the external wiring:

I've only just set it up, but being able to bring things in and out without stopping my mandolin (both hands), kick drum (left foot), or breath controller (mouth) is really great!

Currently I'm only using the "press" and ignoring the "release", but I'd like to make "press and hold" be a different signal. Possibly I'd like something where a short press activate a mode, another short press deactivates the mode, but a press-and-hold activates the mode just for as long as it's held down?