On March 13th our household started isolating. We've relaxed our rules about surfaces a bit since then in response to changing estimates of risk—we've stopped sanitizing our groceries—but otherwise we haven't changed things much: I haven't gone into any buildings, or been close to anyone outside of my household. While the country as a whole is still seeing increasing cases, Massachusetts is doing pretty well: 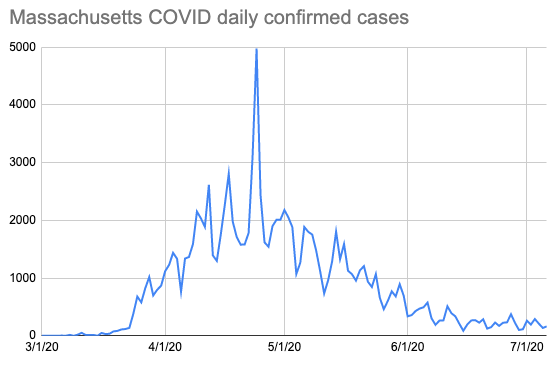 The other indicators are also good: testing is way up, hospitalizations and intubations are way down, and the fraction of tests that are positive is below 2%.

Our house has decided to step down our isolation somewhat, while still being pretty careful:

I know other households that have been using a closed bubble approach, but while I think that approach can work it's not a good fit for us. We have multiple housemates who would like to spend time with people outside the household, and there isn't a perimeter that would work. Additionally, we're much more wary of going indoors than the people we would potentially be bubbling with; most of them are still going into grocery stores.