I've been really impressed by the coronavirus response in my communities. People are cancelling gatherings, working from home, and generally trying their best to flatten the curve. Slowing down the infection rate is critical because if we can't keep this within the capacity of our medical system the harm goes up enormously.

Unfortunately, these are steps that individuals and local governments are taking, based on their own assessment of the situation and without clear guidance from the CDC. This means that there's a lot of social contact still happening, enough that even with the steps we're taking I think it's likely there will be a period when the medical system will be overwhelmed.

What does an overwhelmed medical system look like, in a country like the US? I think the closest comparison is to the the hardest hits parts of Italy, and it looks like running out of space, ventilators, nurses, and doctors. Hospitals are going into triage, and people who would survive with treatment are dying instead. This can happen here, and with our response so far, unfortunately, I think it's likely to.

When it does happen, you don't want to be needing hospitalization during the crisis. This is clearly good from an altruistic perspective, since resources you take can't go to anyone else, but it's also important even if you only care about yourself, since there might not be resources for you.

When might the crisis start? It looks like Italy published triage guidelines on March 6th, and the first English-language reports I'm seeing of their hospitals being overwhelmed are March 10th. Here's a chart of new daily confirmed cases, from the numbers Italy has been reporting to the WHO: 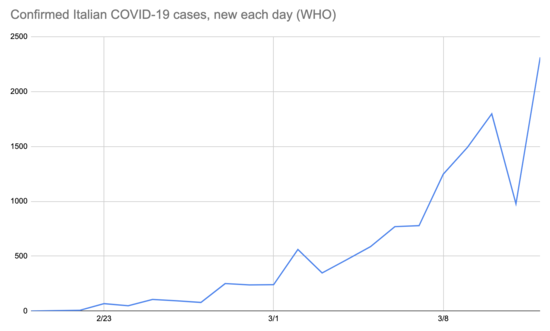 We're very behind on testing, and so we have a lot of "presumptive positive" cases which would likely be "confirmed cases" in Italy, so I'm going to try to use the former numbers. Since the US is much larger than Italy, with some parts less tied to others, I'm going to look at the Boston-Washington corridor to get an estimate of where we are. Here are yesterday's total cases, which are statewide but strongly concentrated in the cities:

This puts us at about where Italy was on 2/29, thirteen days ago and ten days before the first reports of hospitals hitting capacity.

It's possible that our social distancing will be enough to push this out substantially, but I wouldn't count on it. At this point I think if you get sick there's a strong possibility that by the time you need medical help we'll be in triage.

Personally, I'm now being even more careful. Our household has been talking, and here are the precautions we're thinking of taking:

It's not quite quarantine, but it's a lot of the way there. I'm hoping that this isn't needed, but I don't expect looking back I'll think this was an overreaction based on what we knew at the time. Part of why I'm this concerned is that Siderea is, and she's been consistently right and ahead of the curve on this since late January.

I know this isn't something everyone can do, and we're lucky to be in a situation where we can. The more people that take steps like this the more medical capacity will be available for others if things do get really bad.