Spending a lot of time with only housemates, we've ended up playing a lot of Race for the Galaxy. It's a card game that feels like a German board game, and it pulls the best part of solitaire games (minimal waiting for others, with simultaneous play) into a game where your interaction with other players is critically important.

The rules for the game specify that everyone starts with one of a few "start worlds", and then chooses four of six cards to be their initial hand. Picking through the deck to find all the start worlds is annoying, however, and you get bored of the small number of starts. My friend group ended up with a different approach, where you each get a hand of nine cards, choose six to keep, and don't have a start world.

This is strategically much more interesting than the regular game. You're looking at more cards, so you're more likely to be able to find a strong fit, and more unusual fits become more likely. Figuring out whether to keep a valuable card and build your strategy around it, or discard it to pay for other things is even more critical.

We play that on your first turn you have to play Explore, Develop, or Settle. In a two-player game this only applies to one of your two choices. At times we've played without this restriction, but playing Consume Trade or Produce first turn, hoping to take advantage of someone else's Settle, makes the game higher variance for minimal additional fun.

Here's an example initial hand, the most interesting of three random starting hands I dealt: 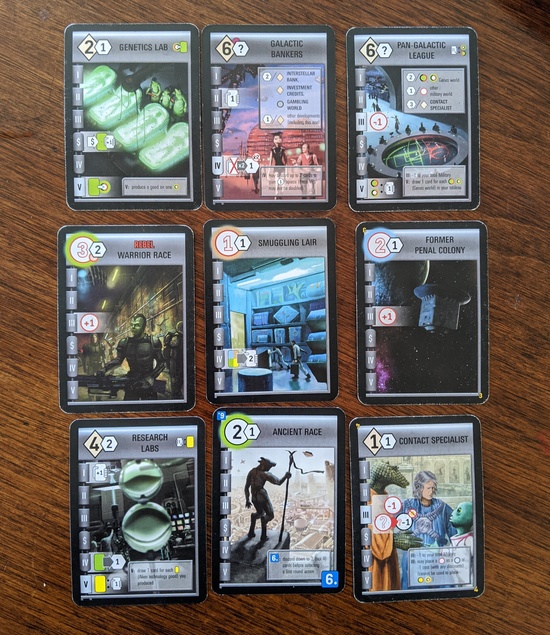 I would probably start by discarding the three ones marked (below) "d" to get my opening six, and then play Develop to put down Contact Specialist for zero. If someone else played Settle I would piggyback with Rebel Warrior Race, using the two marked "m" as money. Alternatively, I could figure I had an unusually coherent hand and that losing either Genes world would be bad, and so I should start with Explore +1+1 and be ready to piggyback on a Develop or Settle. I could also see keeping Smuggling Lair instead of Research Labs and going Contact Specialist to Smuggling Lair: 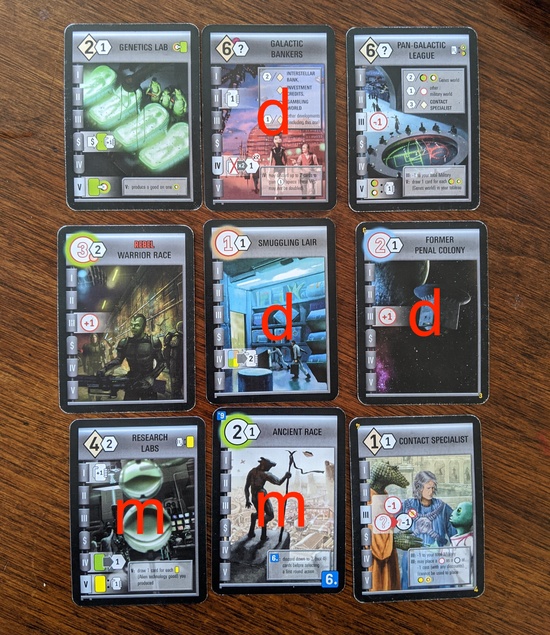 Over the last few weeks I've been getting a much stronger handle on the game, and I feel like I'm playing in a much more focused way than I have before. I think a lot of it is playing so many games, but also having opponents who've also gotten a lot better. I've been paying more attention to "what helps me the most, relative to my strongest competitor" as the key question for choosing phases. Similarly I've been thinking about strategies that piggyback off the phases it looks like my opponents are going to need, and that don't require playing phases that especially help them. I've been paying more attention to when I reveal information, waiting to play cards that show my plans when possible, and occasionally bluffing (or, more often, hedging) by playing cards that benefit a lot from some phases even when I'm not actually intending to go that way.

We play without prestige or takeovers, but if we keep playing games at this rate we might start exploring them more to make the game more interesting. Or playing some draft games.