Until recently, houses had phones. Anyone could place a call out, and whoever was there could answer an incoming call. With cell phones there's much less reason to have house phones, and since moving out of my parents' house I haven't lived anywhere that had one. This seems to work fine for adults, but what about kids?

Our oldest is getting to where they could be home alone for short times, and it would be good if they had a way to contact us. We'll already use the walkie-talkies for short walks within a block or two, but they don't reach farther than that. Using the eeepc to message us would work, but is low bandwidth and I don't always notice Slack notifications. I decided to set up something like a house phone.

They do make products along these lines, but I didn't like any of them and I did have an old Android phone. I ordered a mount for it, plugged in on our charging shelf, and set it up with shortcut buttons for calling both of us: 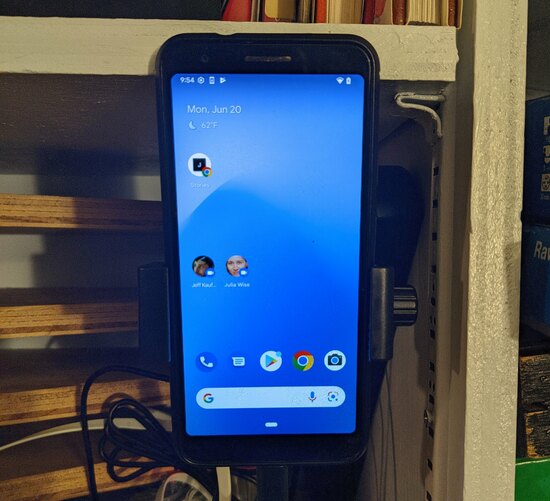 I needed to set it up at a bit of an angle so the mount didn't squeeze the volume buttons, but since the kids are pretty short that actually works out well.

We've only used it for practicing so far, but it's good to get these things set up and feeling routine before you'll want to use them.