We've made four main heating improvements since we bought our house three years ago:

We also increased the volume and surface area of the house by adding dormers, which involved the house being in an intermediate state from May 2016 (demo starts) to December 2016 (insulation complete).

I'd like to compare these in order to see how much of an effect they had. It's kind of awkward because the house didn't spend very long in each state, but here goes.

Looking at gas bills I can get the amount of therms we used in each month. Except it's not each month; the meter read date and interval aren't consistent, varying from 28 to 34 days. I can get the exact dates they used, however, and compute daily therm usage per period. Subtracting the amount used in the middle of summer as "hot water usage" and assuming that's vaguely constant year round [1] I can get daily heating therms per period.

Looking at Weather Underground I can get historical heating degree days for any period I want. [2] This is the average number of degrees it was below 65F, ignoring any days where it was warmer than that. Roughly, we expect each additional degree we need to heat the house relative to the outside to use about the same amount of gas.

Still, I can plot therms against heating degrees, dividing it up by those four periods: 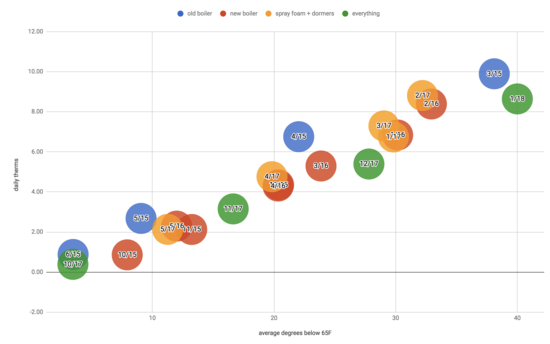 The change from the old boiler to the new one is pretty clearly positive, even with this few data points, and saves us $500/year for heat (and another $130 for hot water which I calculated separately). The cost with installation was $16,500, but most of this was the cost of needing to replace the old boiler which was on its last legs. [4] Looking back at the proposal we got from the plumber, it would be been $11,900 if we had decided to go with a low efficiency boiler, so the cost of the efficiency improvement is more like $4,600. Further, there was an incentive available from MassSave which gave us $5,400 for choosing to install a high-efficiency unit, which means the cost premium was -$800. So it doesn't really make sense to calculate a payback period! We can figure one for the unsubsidized cost, though, which is a pretty reasonable seven years.

The change from adding dormers and accompanying spray foam is the opposite direction than I would expect, though it's noisy. Some of this could be the greater surface area of the house now that the dormers poke out of the roof. I also think we maybe started keeping the house warmer around this time, so it's misleading?

The change from insulating the walls and the remaining parts of the roof was $400/year. This cost $5774, but again their were subsidies through MassSave. This time they were much larger, bringing the cost down to $762. This gives a time to payback of 1.9y, or 14y if you ignore the subsidies.

I'll have better numbers about our current setup as the years go on, though I won't get more information about how it would be without the efficiency improvements.


[1] Incoming water is colder in winter, but the difference between 60F and 40F doesn't matter too much when you're heating to 130F. People might also take warmer showers in winter, but I'm ignoring that.

[2] I was lazy so I scraped them with curl, but doing this manually wouldn't have been too bad.

[3] We currently pay $1.22/therm so I've used that for the whole table to avoid confusing it by changing prices for natural gas. For computing cost per year I used the average annual number of heating degree days in Boston from here which is 5681.

[4] And we didn't want to risk it choosing to die in the middle of winter.