On my way home from work I ran into some people handing out flyers in the station: 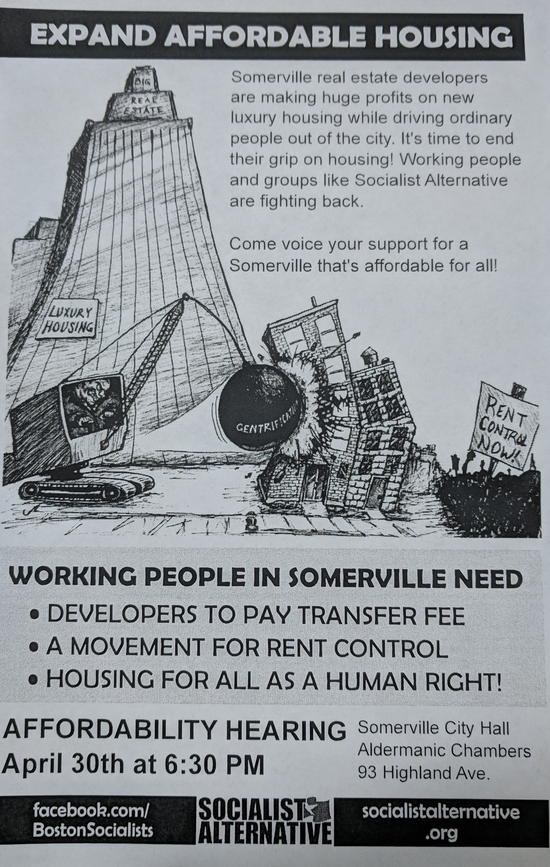 I posted about it on Facebook, and we had an extensive discussion. It felt like a main disagreement was over what things would look like if we dramatically cut back restrictions on housing: Would prices rise or fall? How much? Would more units get built?

I'm going to focus on Somerville, since that's where I'm most familiar, but this applies anywhere in the US where you have single family houses selling for $500k+.

There are currently a lot of different kinds of restrictions on housing, many of which are summarized in the first two columns of this table (most of Somerville is RA and RB). These include setbacks, lot area per dwelling unit, maximum ground coverage, floor area ratio (FAR), height, and stories. These are restrictive enough that famously there are only 22 conforming RA/RB lots in the whole city: 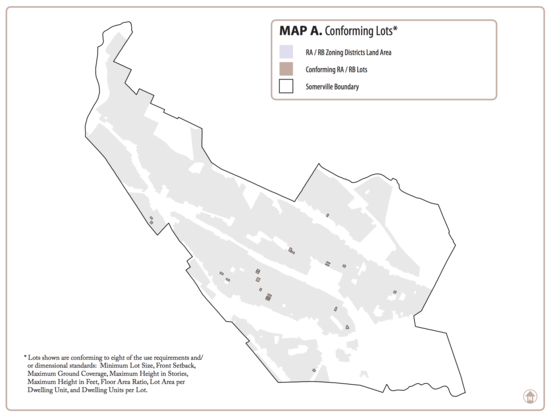 What would things look like if we massively reduced these restrictions? Imagine we got rid of restrictions on lot area per dwelling unit, FAR, and stories, leaving just setbacks, height, and ground coverage. Reduce setbacks to just a small front setback, and raise height and ground coverage to 45ft and 80% (as in areas zoned for CCD-45 today). Don't allow neighbors to delay or limit projects. The developer may opt their lot out of off-street parking minimums, but if they do this all the units become ineligible for on-street parking.

The most dense option under those rules would be four-story row houses. Instead of the current maximum 0.75sqft of floor area per square foot of lot (FAR), you now get 3.2sqft, which is a bit over 4x more space. This massively reduces the effective cost of land, which is the main cost of most houses now. (For example, my house is assesed as 60% land, 40% structure.)

The main thing you'd expect to see is people replacing buildings, primarily ones that are in bad condition, a small fraction of the size they could be under the revised zoning, or in especially desirable areas. Demolition is cheap (~$10/sqft) and each new building would house about 4x the people of what it's replacing. (You don't currently see much of this because most houses now are larger than what zoning allows if you tore the house down to rebuild.)

There would be a lot of this replacement, and the cost of new units would fall to the point where it's marginally profitable to replace existing buildings with high density ones. What would that be? Something like:

That is, you need to pay to buy the property in proportion to how big it currently is, and you make money when you sell it in proportion to how big you make it. This doesn't count that the existing building has more land per square foot, but also doesn't count that new construction is generally in better condition, so it should be about right. We're talking about a density increase from a FAR of 0.75 to 3.2, so this turns into: Figure a cost of $200/sqft, including developer profit, and this predicts an equilibrium price of $260/sqft. Current prices are about $500/sqft, so this would cut prices by about half. For example, 2BR rents would fall from $2,500/month [1] to $1,300.

I'd like to see a more detailed analysis of this, but I think our default assumption here should be that allowing a very large increase in how much housing can be built would bring prices down.