When I argue that we should bring rents down by building more housing, one kind of response I've gotten is:

Why are you trying to move more people into cities? There's lots of housing available in the US, it's just not in the currently trendy cities. Instead of moving people we should be moving jobs. Why couldn't Amazon have put their "second headquarters" in a deindustrializing city like Milwaukee instead of splitting it between DC and NYC?

The idea makes sense: these cities were built out for industries that have moved on, and now they're over-built for current demand. They have lots of buildings available, both commercial and residential, along with a lot of other underutilized infrastructure.

One way to look at it, then, is why aren't companies just moving there on their own? Company rent would fall, they could pay their employees less for the same standard of living or effectively give them all large raises by holding pay constant. Everyone would waste less time in traffic. The host city would be strongly supportive instead of somewhere between negative and neutral. What's keeping them put?

A major factor is that current employees don't want to move. If Google announced it was moving everything to Pittsburgh, ~80% of the company would quit. People put down roots and get attached to areas, generally more so than to jobs.

New companies, however, don't have employees they would need to move. Why do tech startups choose the Bay when almost anywhere else would be cheaper? I see two main answers: to be close to their investors and to be able to hire from a deep talent pool.

And this gets us to the real problem with "let's distribute jobs across the country": industries benefit enormously from centralization. Being in the main city for your industry means, for a start:

People expected telecommuting to change this, but even though we have many technical tools that make remote work far more practical than it was even ten years ago, physically being in the same place as your coworkers remains extremely valuable.

Industries do vary, however, in how well centralization suits them. Three groups:

Many fewer people work in naturally-distributed industries than they used to. For example farming is down to only 2% of the population: 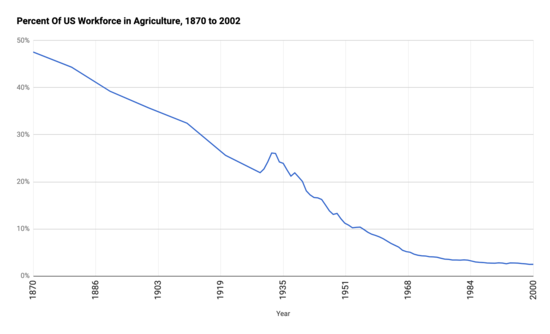 An early example of a centralized industry was the auto industry, in Detroit. There was nothing about Detroit that made it uniquely good for producing cars, but as it became the consensus location for the industry it developed local culture and knowledge that had strong advantages for building cars.

These two considerations mean we want:

Overall, people working on the same thing in the same place as each other remains incredibly valuable, and we should let that happen. Instead of trying to distribute industries that are naturally centralized, we should let them centralize while managing the risks. Building more housing doesn't just let people move to where the jobs are, but also allows people working on other things afford to live in the city.