So far I've been using the AXIS-49 like a keyboard: it's velocity sensitive, so this works reasonably well. Here's an example of me imitating an accordion:

This isn't as expressive as I'd like, however, because once I've begun a note the only thing I can do is choose when to end it. I can't swell or fade, it just stays at constant volume until I lift my finger. So I got a breath controller: 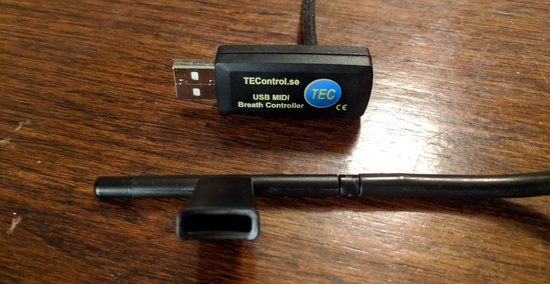 This is a sensor that you blow into, and it converts the pressure of your breath into MIDI values. For a long time the standard tool for this was the Yamaha BC3, but that's discontinued and now it looks like the main thing is one made by TEControl. They also have a fancier one that gives four axes of detail (breath, bite, tilt, nod) and I kind of wish I'd gotten that one instead, but I'm pretty happy as is.

For playing this, what I'd like is for how hard I hit the key to determine how aggressive the attack is, and then how hard I'm blowing to determine how loud it is. This isn't really how a real instrument works, where how quickly you press your fingers down has minimal effect, but I think these are the two main dimensions I'd like to control.

I had a really hard time figuring out anything that was able to handle this well. There are tons of software synths out there, things that can go from MIDI to audio, but they're almost all aimed at keyboard style playing where notes have a velocity and a duration but don't take further input after the key has been pressed. It may be that some of them can be configured to do what I want, but I wasn't able to tell which. The best I could get with widely available (and free!) tools was to map breath pressure to volume while using a constant velocity override, but real dynamics are much more interesting than just volume and you're not getting interesting attack variation.

Looking around the main thing in this direction seems to be Sample Modeling's The Sax Brothers, but that's discontinued. They don't say why, just "We are very sorry about this, but we must of course follow the letter of the law." This was very confusing until I found Audio Modeling's FAQ, where it looks like various people had some sort of falling out. The upshot is that SWAM Saxophones seems to be the sucessor product. I bought that, and have been trying it out, and it seems pretty good:

One thing that has taken some getting used to is that you need to let air leak out of your mouth around the breath controller. Otherwise, you're holding your breath the whole time and when it comes time to take another breath you're stuck with a bunch of stale air you need to exhale first.

I still have some technical things I need to deal with. The first is figuring out a better host for the instrument. Right now I'm using Garage Band, which mostly works except that there doesn't seem to be any way to tell it what midi devices or channels to listen to. Instead it just takes in all of them at once. In my current setup the AXIS-49 is sending Harmonic Table MIDI, and then I'm remapping it to Wicki-Hayden. Garage Band is receiving both of these, though since the synth is monophonic and the note from the converter arrives very slightly later you just hear the Wicki-Hatden sounds. Except when you press a key very gently to get a slide effect it slides from the corresponding Harmonic Table note, generally very far away, which sounds silly.

My other problem is that I don't want the synth to be monophonic. This isn't a major issue: most of the time I think I just want a single melody line. But sometimes I'd like to be able to pretend to be a small horn section, and with my current setup I can't do that. I was thinking that I would run multiple instances of the synth listening on different midi channels, and then modify my converter to keep track of what notes are being played and fan them out over channels when needed. But since Garage Band doesn't seem to care about channels, and also doesn't seem to be able to run multiple instruments at once, this doesn't work.

So if people have recommendations for better hosts I'm instested. I'm also interested in other synthesizers that do a good job with wind-style (separated attack and sustain dynamics) so I can play with other sorts of sounds. Something more synthy could be fun, doesn't need to be going for realism the way the sax is.

Mostly at this point, though, what I need to do is practice!