With the house in somewhat reasonable shape and the kids asleep I took another try at making some music by layering multiple parts. Looks like I last tried this five years ago. Since then I've figured out enough Reaper that I'm not using Audacity, but there are probably still a lot of things I'm doing wrong. 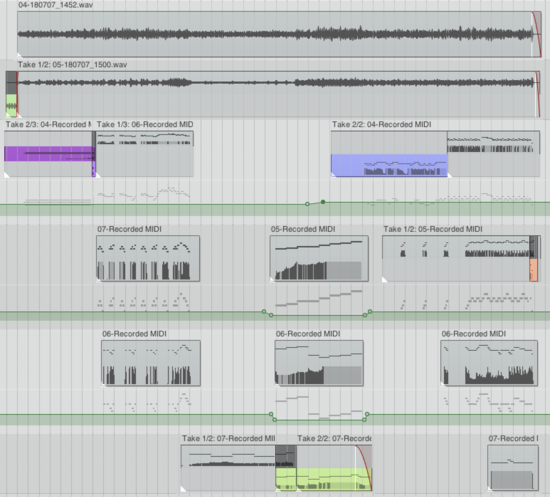 I'm using Reaper on a MacBook Pro, with a Presonus VSL1818 for audio in and out. I was initially having all sorts of audio drop outs, even after upgrading to the latest firmware, until I tried putting a USB 2 hub between the VSL1818 and the computer. The VSL1818 predates the USB 3 spec and Presonus has had an enormous amount of trouble getting it to work well with USB 3. [1] The hub seems to force the laptop down to USB 2, which then works better with the VSL1818.

Latency is also painful. The time from sound going into microphone or MIDI until it comes out of the headphones is something like 100ms. [2] When playing fully electronic instruments I'm able to listen to this delayed output and compensate as if I'm playing a slow-to-sound instrument. This quickly becomes unconscious, but my timing isn't as precise as with a real low-latency instrument. For acoustic instruments like mandolin, though, I need to manually align the track and it's hard to get it right. I'm not sure what's going wrong here.

Mostly I'm using this as a way to get a sense for how to play my new saxophones: what sort of rhythmic patterns sound good? Where should it fall in the music? At some point I want to figure out if I can do some of these patterns with multiple fingers at once to imitate playing two horns.


[1] I also continue to be bitter that Presonus dropped the ability to run live sound from the VSL1818 a couple years after I bought it. "VSL" stands for "Virtual Studio Live" and the whole idea was that you could use a laptop plus the VSL to get the capability of their big Studio Live boards. Which is why I bought it.

[2] I looked for buffer settings and there don't seem to be any? "Decrease the buffer size" is definitely the advice I would give to someone else who came to me with this problem. I'm restarting the computer before working, and don't have other applications open (though background programs are still running).

←
How to parent more predictably Keeping the house cool
→

Collections: The Queen’s Latin or Who Were the Romans? Part IV: The Color of Purple

This is the fourth part (I, II, III) of our series asking the question “Who were the Romans?” and contrasting the answer we get from the historical evidence with the pop-cultural image of the Romans as a culturally and ethnically homogeneous society typic…

via A Collection of Unmitigated Pedantry July 23, 2021

I’ve spent more than ten years talking about the cost of construction of physical infrastructure, starting with subways and then branching on to other things, most. And yet there’s a problem of comparable size when discussing infrastructure waste, which, …