Expression controllers can make synthesized instruments sound much better, but they're generally pretty expensive. For example, the breath controller I've been playing with cost me EUR 132. There's nothing fundamentally expensive about it, just a low volume product. Which got me thinking: is there some commonly mass produced device that gives a smooth range of outputs? What about a game controller?

I've never been into console gaming so I don't know much about controllers, but after looking at some pictures it looked like the PS4 one is well laid out for joystick use, so I ordered one ($26, shipped): 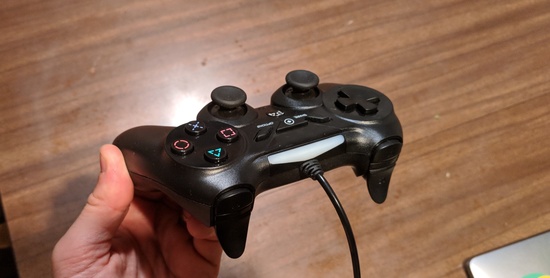 It connects via USB, and pygame can read from it out of the box:

Since music is so latency sensitive (though maybe not for expression controllers?) I didn't want to have to go via python, so I decided to write something small against the OSX native API. The docs for the native API are pretty annoying, so the SDL source was a helpful guide.

It's ready and working, and you can try it out: