Last fall we had solar panels installed. Our roof is pretty marginal for solar, large parts blocked by trees and the remainder mostly facing West, but incentives were high enough that it looked decent. And even if it only broke even I still liked it for the resiliency advantages. It's currently doing slightly better than expected, so I'm happy! 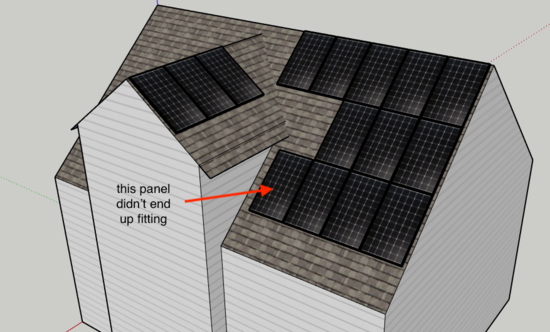 The installers predicted we would see 3.45MWh in the first year, slowly ramping down to 3.25MWh/y over the next twenty five years as the panels degrade. After a year of operation, we've seen 3.95MWh. This includes three short periods in March, April, and August where the system turned itself off and needed to be reset by the installer. This is covered by our extended warranty, but does make me nervous about its long-term robustness.

One of the bigger risks I saw going into this was that the installers had a lot of incentive to overestimate our production, so I'm glad that while it was only in operation about 96% of the year it still made ~14% more power than expected.

Four MWh is not a huge amount of electricity, however. At wholesale rates of ~$40/MWh (pdf) this would be just $160. MA has net metering, however, which means we can subtract the power generated from our bill. Our (retail) rate is $214/MWh, so this is $844 for the year. The whole system cost $26k, so this doesn't break even within the system's lifetime, and that'a ignoring opportunity cost.

There are additional incentives, however: a 30% federal tax credit, a $1k MA tax credit, and SREC II generation incentives. The tax credits bring the effective cost down to $17k, and the generation incentives give us ~$500/y-$700/y for the first ten years. This gives 11-13 years until payback, and if we figure a 25 year lifetime (the length of the warranty) and electricity going up 3%/y it's equivalent to an investment returning a nominal ~9%.

So while I don't think rooftop solar makes much sense for society (unless we required systems to function during power outages, which we don't) and our roof is marginal for solar, it does look like our system is working out from a self-interested perspective.