Beantown Stomp has been open for registration for a bit over a week, and we have 122 people registered. In our announcement we said we would run a lottery for the remaining tickets if we had 150 registrations in the first week, and we didn't, so we're going to stay first-come first-served. 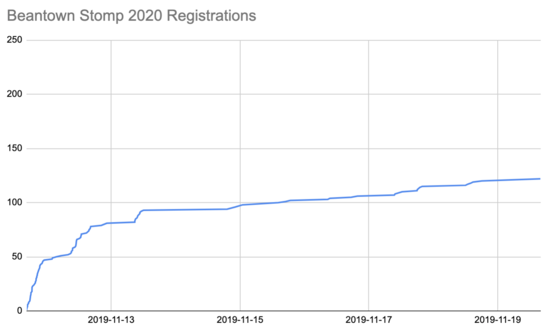 When I initially proposed a hybrid model I had been thinking of running the initial stage for a month, and after people convinced me that a month was too long we decided to go for a week. The goal with a hybrid lottery is that you only run a lottery if you need one. Some events are so popular that they sell out before everyone who would like a ticket has had a chance to fill out the registration form, while others don't sell out at all.

Now that I no longer think it's important to leave registration open for a week or a month, though, we really could just do something simpler. Open registration, and treat all entries you get in the first 24hr equally. If after 24hr you're full, run a lottery, otherwise start first-come-first-served. Since it already takes us about a day to get back to people anyway, there's not much downside in this approach.

I'd probably actually want to do this by announcing "registration will open on day X, though you can fill out the form now, we just won't get back to you until day X+1".

Am I missing anything, or should we do this for future iterations?