I've been working in computational bio for a couple months now and I've been learning a lot. There's still a ton I don't know, but I'm currently at a stage where I've put some pieces together while still remembering what it was like not to understand them, which is often a good time to try to write introductory stuff. Trying to explain things is also a good way of making sure I understand them myself. So, here's an dump of what I've been learning:

The biological world primarily stores information with nucleic acids. These are series of nucleotides, often called bases: A, C, G, and T. For example, a strand of nucleotides could look like:

The two main kinds of nucleic acid are DNA and RNA. They differ in a few ways, but from a computational perspective they're very similar. Physical RNA will have U instead of T, though in sequencing data you'll often see it with with T anyway.

Each base has a complement: A bonds with T, and G with C. A nucleic acid that comprises two bonded strands is called double stranded. Each base in one strand will be bonded to its complement:

This is the famous double helix and makes for a more stable structure than single stranded nucleic acid.

Going from a physical nucleic acid to a sequence on a computer is sequencing, and the reverse is synthesis. I'm only going to talk about the former; I haven't learned much about the latter.

The most common sequencing method today is Next Generation Sequencing, commonly called Illumina sequencing after the main vendor. Bases are dyed and the machine reads their colors. The output of sequencing is a large number of short reads. Each read is a sequence of 50-300 bases, usually around 150. In setting up the sequencing run you choose how many bases to read, and different applications will make the most sense with different lengths. Accuracy drops off as you read farther along the strand. Note the lengths we're talking about are way less than the length of a full nucleic acid, which is generally at least thousands of bases. Not getting the full picture is a big downside of this kind of sequencing.

Let's get some real data to play with. When people publish a paper that depends on sequencing they generally upload their raw data to the NIH's National Center for Biotechnology Information (NCBI). Here's a paper I've been looking at recently, which sequenced wastewater: RNA Viromics of Southern California Wastewater and Detection of SARS-CoV-2 Single-Nucleotide Variants. If you look down to the "Data availability" section, you'll see:

Raw sequencing data have been deposited on the NCBI Sequence Read Archive under accession number PRJNA729801, and representative code can be found at https://github.com/jasonarothman/wastewater_viromics_sarscov2.

The GitHub link is helpful for getting metadata (what does each sample represent?) and understanding how they processed it (what tools did they use and how?), but for now we're looking for sequencing data. The accession number is "PRJNA729801", and while we could click through and download it from the NCBI, the user interface on the European mirror (European Nucleotide Archive) is much better. We go to their landing page and enter the accession number: 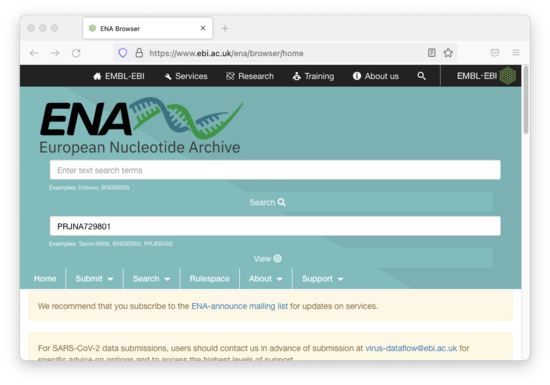 This takes us to a page that describes the data: 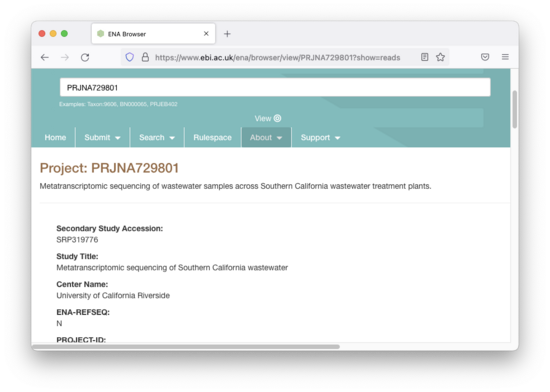 We want to sanity check the title to make sure we didn't end up with the wrong data set, and "Metatranscriptomic sequencing of Southern California wastewater" sounds about right.

Scrolling down there are links: 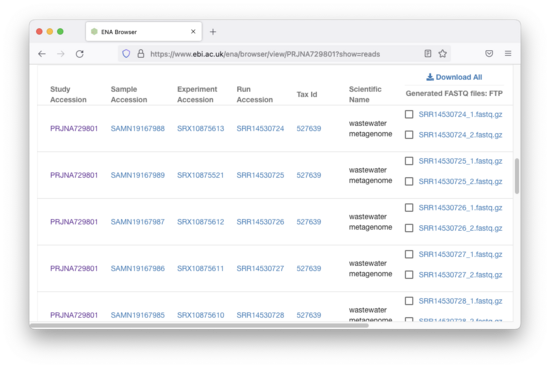 These files are generally both very large and very repetitive, so they're a natural candidate for compression. The most common option is gzip, and that's what they've used here. Let's start by decompressing it:

Now we can look at it:

I can see that there are 2.7M reads in this file:

You'll notice that this read ends in a long string of 'G's, and this is actually very common in the data:

This is called Poly-G and comes from the particular chemistry this sequencer uses. It identifies bases by dying A and T one color (green), and A and C a different color (red). This means A will be yellow (green+red light), T will be green, C will be red, and G will be black (no light). The sequencer can't distinguish "there are no bases" from "there are bases but they're all G and didn't pick up any dye". When a sequence is shorter than expected it gets a Poly-G tail. You generally trim these tails after sequencing as part of a general quality control step; we'll just do sed 's/GGGGGGGG*$//' for now.

The sequencer has some information about how confident it is: sometimes it sees a single clear color, other times there's a bit of another color mixed in. This is what the quality score encodes. It's the same length as the sequence, and they correspond character for character.

You convert the letter to a numeric value by taking the ASCII value of the character and subtracting 33, the ASCII value of the first non-whitespace printable character ('!'). To convert this to an error probability you multiply by -0.1, take that power of ten. For example, 'F' is ASCII 70, and 10^(-.1*(70-33)) is 0.02% chance of error, or a 99.98% chance of being accurate. An increase of ten ASCII positions indicates a 10x higher accuracy.

This sequencer uses only a few different quality values:

Looking at this one sequencing run I see:

Let's pull out just a short section of the sequence and its corresponding quality scores:

In cases where you don't care about quality scores you'll often use the "FASTA" file format instead:

You'll notice that some of the files end in _1.fastq.gz and some end in _2.fastq.gz, and each pair has the same number of reads:

This is because this particular data set used paired-end sequencing. The idea is you simultaneously sequence a section at the beginning (the forward read) and a section at the end (the reverse read) of each fragment, putting them in the _1 and _2 files respectively. There's an unsequenced gap between them, and you know about how long it is based on how you chopped up your fragments before sequencing. This is useful in figuring out how these fragments can be assembled into full genetic sequences.

All of this so far has been describing short Illumina-style reads, but there's another kind of sequencing that's becoming increasingly popular, called Nanopore sequencing. The nucleic acid is fed through a tiny hole in a chip, and different sequences of bases will generate different electrical signals as they pass through. Converting these signals to a string of ACTG and producing a FASTQ file is basecalling and you generally use a neural network running on a GPU. This produces much longer reads than Illumina sequencing, because you can feed through an arbitrarily long nucleic acid. Read of tens of thousands of bases are common, and reads in the millions are possible. Long reads are helpful for many things, especially if you're working with a mixture of nucleic acids pulled from a natural environment like skin, saliva, wastewater, etc. (metagenomics, metatranscriptomics). At this point Nanopore is approximately cost competitive with Illumina, but still has a much higher error rate.

Let's stop things here, since this is long enough already. Other things I might write about at some point: assembly, qPCR, amplicon sequencing, reverse complements, tooling, k-mers. Happy to answer questions!