A friend recently reshared this:

Today I want to talk about why you buy the way you do. Did you know that WE collectively buy five times more clothes than we bought in 1990? — @AjaSaysHello

This seemed a bit unlikely to me, if they're talking about Americans, and fashion waste stats are typically very low quality; is it true?

Maybe we're buying more-but-cheaper items? That does seem to be happening some: 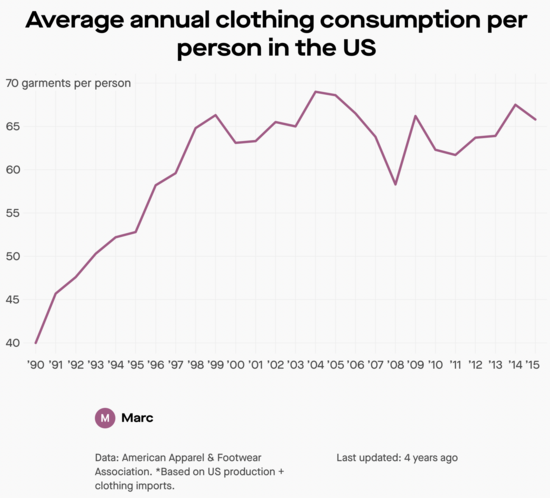 I wanted to recreate this chart myself, but while I think this data probably comes from the Apparel Stats report, they wanted me to make an account to view it and that functionality was broken:

I did find the WSJ claiming that "American shoppers snap up about five times more clothing now than they did in 1980" but they don't cite it. This is 42 years ago instead of 32, but is it correct? This would imply a growth of 14 garments annually in 1980 to 40 in 1990, almost twice as fast as clothing purchases grew in the 1990s, so it seems unlikely to me, but let's keep looking. The article is an excerpt from Dana Thomas' 2019 book Fashionopolis: The Price of Fast Fashion and the Future of Clothes. Google Books tells me this appears on P3 of the book, but I can't find a citation using the preview tool.

I also see this claim on p158 of in Jacqueline Raposo's 2019 The Me, Without. They cite the EPA's Advancing Sustainable Materials Management: 2014 Fact Sheet, but reading through the sheet I don't see this there.

On the other hand, possibly this statistic began as a global number? That would be a lot more plausible, but also makes it much less relevant to discussions around the sustainability of fast fashion. Instead of being driven by Americans or other rich consumers becoming more wasteful, it would be driven by global decreases in poverty. Which is a very good thing!