In the effective altruism movement it's common to break things down into three general approaches: For example, my working as a programmer so I can donate money is earning to give, while when I was briefly working full time as an independent researcher that was direct work. My time in school was primarily about building career capital, though I wasn't thinking about things in an EA way at that point.

I've been thinking about how these choices interact with paying for college for your kids, and especially the financial aid system.

Fancy colleges use a very powerful system of price discrimination. They set their price very high, but don't expect most people to pay the sticker price. Instead they have a financial aid system where they collect as much information as possible about each family's financial situation, estimate the most the family would be able to pay, and then charge that. About twenty top schools are rich enough to charge exactly what they think you can afford (meet 100% of demonstrated financial need without loans), while about another ~10 will do this for families with income under a threshold, and another ~45 will include student loans in the price (meet 100% of demonstrated need, with loans). Here's a list of these schools.

If you don't have so much income or assets that the college will expect you to pay the full amount, you can think of these as a 100% tax on your post-tax income: earning $1 more means the college will charge $1 more.

This pushes very hard in favor of direct work over earning to give. If I earn $200k after tax and donate $150k, the school still sees that $150k as money I could pay them. Even though I only took the high earning job so I could give the money away, that's not how the school would see it. On the other hand, if I took a direct work job paying $50k after tax I would be in a similar place in terms of effective income, but the school doesn't make a claim on the income I'm passing up.

Before we can get into figuring out approaches, though, how much is college likely to cost? My kids are two and four, so let's say the mid 2030s? Let's start concrete and look at how prices have been changing at the college I went to (Swarthmore), adjusted for inflation: 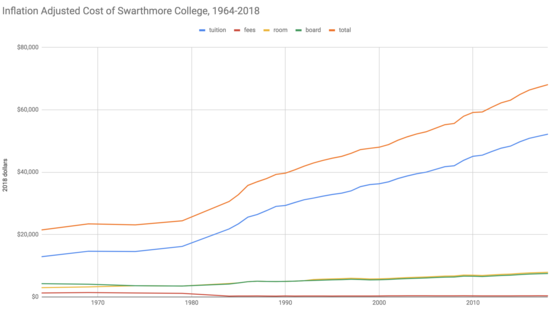 Looking at that chart, the main thing that comes to mind is to wonder what changed in the early 1980s? Why did costs suddenly move from increasing at about the same rate as inflation to increasing so much faster? I've read some things suggesting this is colleges hiring many more administrators, but I'd be really curious to read more if people know what's happening here? I'd also love to see two similar charts, one showing the amount students actually pay, after financial aid, and the other showing college expenses per-capita, since fundraising is also a large source of college income.

While understanding the growth in costs more would be useful in trying to predict it, the slope is remarkably steady going back to that bend in the early 80s. Averaging over the 1986-2018 period, costs have been going up $1,009 per year in 2018 dollars. Naively extrapolating you get: 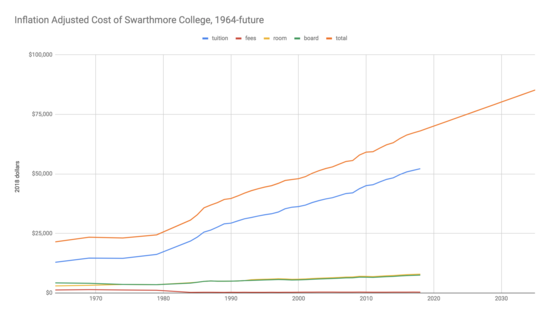 This would give estimates, still in 2018 dollars, of $82k for when a now-four year old starts college, and $87k when a now-two year old finishes.

This was much less of an increase than I was expecting to find! If you look for a cost of college graph you often find things like: 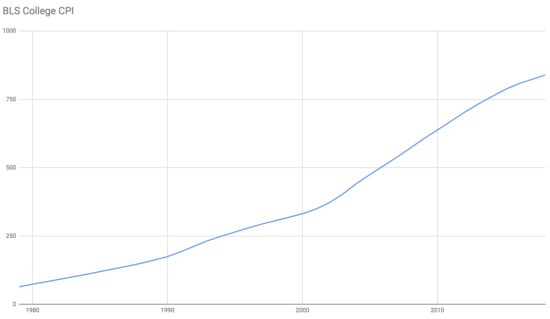 This is graphing the BLS College Tuition and Fees consumer price index, which tries to track the cost of college. This shows college cost rising much faster than above, because it isn't adjusted for overall inflation. What if we adjust this for inflation, the same way we would convert past dollars to present dollars? 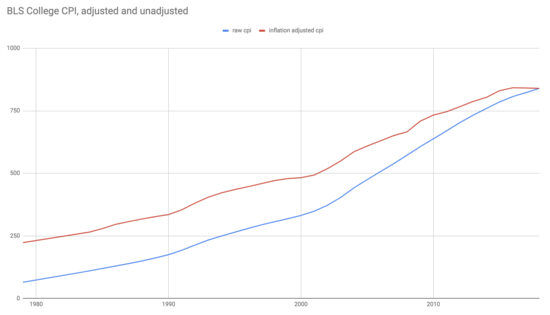 This is still a faster increase than we saw with Swarthmore. Let's put them side-by-side: 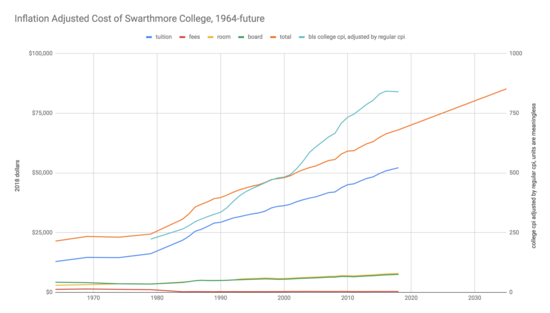 I think what's going on is that Swarthmore was already a very expensive place, while most of the schools in the CPI started off much cheaper. While I haven't looked at numbers for the other schools at the top of the price range, I'm pretty sure I'd see the same thing: large cost increases, but not as fast as the college CPI.

Are there other factors affecting cost? For the most expensive schools, with their financial aid-assisted price discrimination I think there's not much of a downside to continuing to increase the official price. A larger and larger fraction of people will be on financial aid but, since these schools are careful not to charge more than the families can pay, higher prices probably don't end up turning people away. I'm not sure what keeps the colleges from raising their prices even faster, but my guess is that they want to avoid looking greedy. This makes me think $80-90k/year in 2018 dollars is a pretty good guess for schools at the upper end of the price range in the 2030s.

Now, there are lots of other ways things could change by the 2030s. College could lose its relevance as top employers start recruiting promising high school students. The idea that everyone should go to college could fade for some other reason. Colleges could be "disrupted" by something else that can fill a similar role in a much cheaper way. Or colleges could become even more central, even more competitive, even more able to use high sticker prices as evidence of the value they provide, financial aid loses its remaining stigma, and sticker prices could rise faster. Or there could be some kind of collapse or disruption, where this all looks very different. I'm going to try looking ahead assuming stuff doesn't change, but also avoid giving recommendations too tied to the current way things work.

(It's also possible that our kids won't be strong academically and so not a good fit for college, especially the top colleges I'm talking about here. We'll know much more about what they're like closer to the time, and can adjust then.)

First, whether this is worth caring about at all depends on how much money you're making. If your income is $1M/year, you probably do well to continue earning to give even if colleges are taking $85k. On the other hand, if I'm making closer to $300k then after taxes and college there would be very little left to donate. It's very hard to predict how the market for software engineers will look that far out, and I think there's a decent chance my income will fall substantially, but I'll keep going assuming it stays in this range.

I'm guessing my two kids will be in college for a combined six year span, so this would mean at least eight years away from earning to give. One consideration is whether I'd be able to move back into this after being away for so long. It might be worth having six years of not being able to donate 50% in exchange for the years after being much more productive. I think this depends a lot on what I do in the intervening time. For example, if my direct work were in tech of some kind I'd still be getting relevant practice, whereas if I did this as more of a career change it would make more sense if it wasn't something I would be switching back from.

Another possibility is that I could continue earning to give, and our kids could go to a cheaper school. I don't know what that's likely to look like in the 2030s, but if I were deciding this today my guess is that it's worth it for our kids long term to go to the best school they can get into. It doesn't take very many years of higher income alone to make up the difference.

I also looked some into the best ways for parents to save money if their kids would be getting financial aid. While I previously suggested students get married so their parents' finances wouldn't be considered, schools that do this kind of price discrimination request the CSS Profile in addition to the FAFSA, which does include finances for parents of married students. Details of how this works are likely to change, but it looks like retirement accounts are pretty much the only place you can reliably put money and not be expected to use it to pay for your kids' college. Retirement early withdrawal is a 10% penalty, and schools typically take 5% of assets per year, so it makes sense to put money into retirement accounts even if you think you might need it before you retire.

It looks like saving money for college in a 529 plan, especially one in the student's name, is not a good idea. The more you save the less financial aid you get, though not with at high a rate as with income: the CSS Profile currently figures 5% (per year) for parental assets and 25% for student assets.

College is still a long way off, with my kids yet to start kindergarten, so it looks like the only two take-aways right now are that it's not useful to safe explicitly for college and that retirement savings accounts are good. Look for an update some time around 2028.