When the Free Raisins first started trying to get booked for dances I didn't really understand how this worked. Should we ask people to play their dance? Wait to be asked? How far out do dances book? What times of year do they do their booking? We've now been booked for 126 dances and I feel like I understand things better now so I went back over emails and collected data on how booking worked.

For each dance I recorded what date they confirmed the booking with us, the name of the dance, the date of the dance, and who asked who. Then I made a chart, with each line running from the booking date to the dance date, colored by how we got the gig:

(The code for all of these plots is on github.)

Alternatively, you could look at this as a histogram: 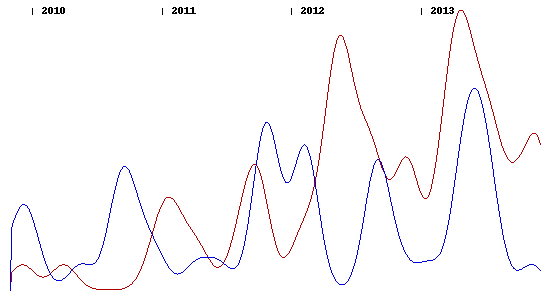 These are bookings over time, comparing ones we asked for (blue) with ones that where we were asked (red). The numbers here lag a bit because these are confirmations and not requests, though we're pretty fast at responding to email and generally get things confirmed within a few days. It looks like organizers do a lot of asking in the spring, so if you're trying to get booked for dances it sounds like you want to make sure you're on their radar when they're doing that booking. Probably also good to plan tours before then, so the dates aren't already filled up.

In our first few months we were very active sending out emails and talking to organizers, trying to get booked for the various small dances around Boston: Medway, MIT, Northboro, Kingston, Cotuit, Mystic. Some dances said "yes" right away, others said "play some other dances, get some experience, and then we can talk." After about a year we started getting asked back to play these dances again and also asked to play other dances.

In early 2012, after playing dances for a year and a half, we put together our first tour. We had gotten asked back to play Glen Echo's Sunday night dance and found seven other dances we'd like to play. This meant lots of emailing, and lots of finding alternate dances when the ones we'd originally hoped to play turned out to already be booked. No one said 'no' or asked for references: I think the assumption was "they're touring, they must know what they're doing."

In June 2012 we did our last round of asking nearby dances to book us. After this point the only dances we were asking were ones where we were looking to put together tours. We were on the lists of enough organizers that we were getting to play about as many dances as we were interested in playing. You can see this in the histogram if we break out dates we requested for a tour (green) from times when we just say "hey, could we play your dance?": 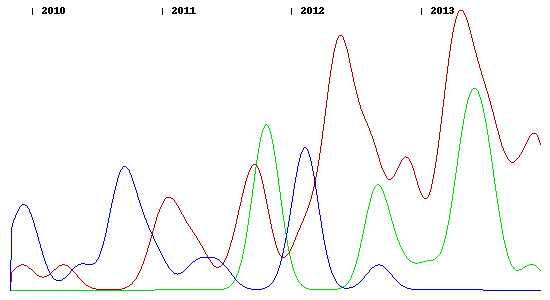 In the past few months we've started to get asked to play dance weekends. I hadn't tried asking to play these, based on informal conversations with other musicians who had recommended against asking. I think a big contribution here was playing Catapult; three of the weekends explicitly mentioned that's where they heard us.

Overall the main thing I see in this data is about what times organizers are looking to book bands. Before going through this I would have said late summer, but it actually looks more like spring. It's also interesting to see how as you play for more and more dances people start asking you back and it takes less work keep a full schedule of upcoming dances.

←
Breast-style Bottle Nipples What Have I Got In My Pocket?
→

Working on an emergency timetable for regional rail has made it clear how an environment of austerity requires tradeoffs that reduce efficiency. I already talked about how the Swiss electronics before concrete slogan is not about not spending money but ab…

Fireside this week, but next week we are diving into our long awaited series on pre-modern textile production, though we will be particularly focused on the most important clothing fibers in the Mediterranean world, wool and linen (rather than, say, silk …

via A Collection of Unmitigated Pedantry February 26, 2021

The Troubling Ethics of Writing (A Speech from Ancient Sumer)

(Translated from a transcript of an ancient Sumerian speech by Uruk's most well-respected Scriptological Ethicist) Writing is a profoundly dangerous technology: Access to writing was initially, and still remains, uneven. What's worse, the rich are m…