Growing up we didn't have a video game system and I've never played very much, but a friend found that working from home was not compatible to having their PS3 around, so now we have theirs. I was looking for games at a good level for our kids (Lily, just turned six, and Anna, just turned four) and on the advice of this r/PS3 comment decided to get a used copy of Cloudy With A Chance of Meatballs. We've now played the first few levels, so I wanted to write up my impressions. Here I am, someone who doesn't know anything about video games writing about a game that came out eleven years ago, whee!

The game doesn't bear much resemblance to the book, except that there's large food everywhere and occasionally more falls from the skies. You move around with a joystick, jump with a button, and use whatever implement you happen to be holding with another button. In our first time playing Lily understood each of the actions right away, but had trouble combining them. Jumping onto something involves both moving and jumping at the same time, which was tricky. Even just our second time playing she had that better, but precise movement is still at the edge of what she can do. 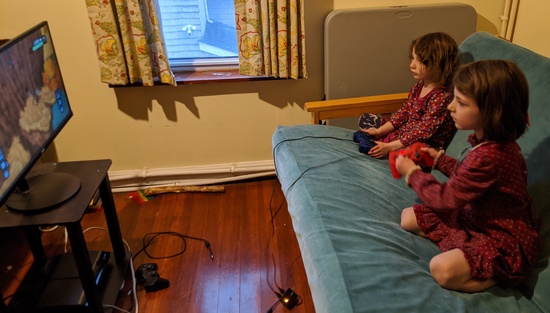 Anna understands how the controller works, but doesn't have good enough command over her fingers to reliably get it to do what she wants. She can make her character go in her chosen direction more often than not, but if she's going for any sort of target she usually overshoots it. Some getting frustrated and just pressing buttons randomly. I think I should play a few more games with just Anna, because when Lily's playing she often just watches her instead of figuring out how to move her own character.

The game has a main character and a sidekick, but they can do all the same things. The difference is that if the two go off in different directions the camera follows the main character and the sidekick gets teleported back into view. There's nothing the sidekick can do to accidentally impede progress. This works very well for two kids where one mostly understands the game and the other is tagging along.

The characters can die, but death doesn't matter very much. If you fall in the water or spend too long walking through hot chili you fall over dramatically but then pop back up again next to the other player. If both players die at once you start a bit farther back, but not much.

There's a small amount of violence, like little gummy bears who pounce on you, and you do chop them or pour hot coffee on them, but it's light and cartoony enough that I'm not really worried about it.

So far Lily and Anna have played with me kibitzing, I've played with each of them individually, and ~5d in they just tried playing together without me. They've played about half an hour a day each day since we got it, and would be enthusiastic about playing longer if we let them. It's a very silly game, but it's at a good level for them in that there's nothing you need to do that's very hard and the stakes are super low throughout.