I made another iteration of my footboard: 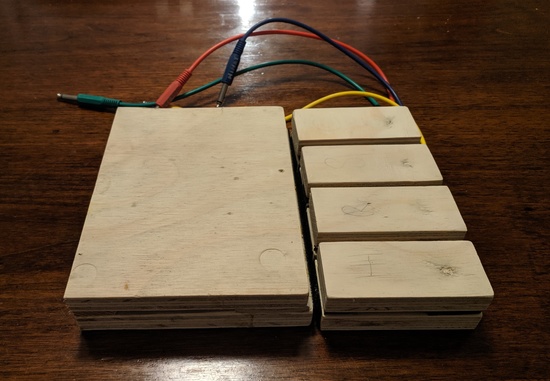 Changes since the last version:

I've only made one for the right foot; I may make a left-foot version as well, not sure.

The separate sections were the impetus, and I'm liking them a lot. I can switch between different drum sounds during a set just by moving my heel, and I'm starting to play with throwing in a third sound while playing. Here's an example video that has me switching the high sound from snare to rim, and at times throwing in a crash hit right at the end of a phrase:

I made this yesterday, so I haven't fully learned what I want to do with it yet. One thing that's pretty clear is that switching between adjacent pads is way easier than farther ones.

Here's one of the sections. It's like a small version of the v2 footboard. Top to bottom it's a block with a carved heel indentation, a piezo glued to the underside, 1/4" sorbothane, another block, and then grippy stuff so it doesn't slide around. Velcro to attach to other sections: 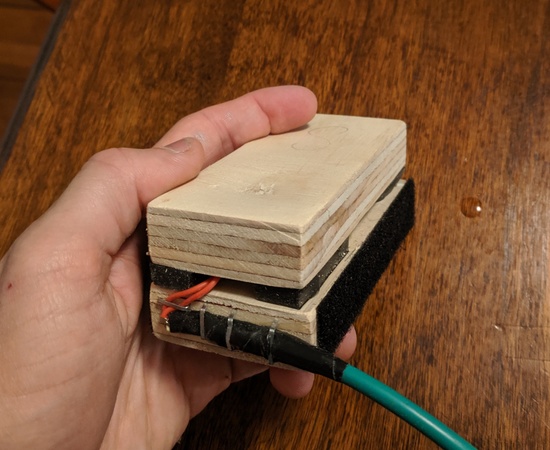 The blocks are 2" x 4", with the heel indentation 1" from the back. The top of each block is 1/8" slightly narrower than the base so I don't hit multiple blocks by accident. The front section is about 7" deep and 8.5" wide.