I've been excited about hexagonal keyboard layouts for a couple years, and was sad that the Axis-49 was discontinued before I got a chance to buy one. This is a keyboard with 98 velicity sensitive hexagonal keys arranged in a grid: 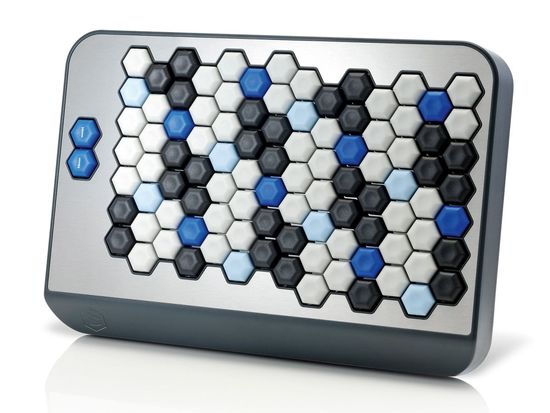 I'd been checking used markets occasionally, and last week I saw a listing and ordered one!

It comes in a harmonic table layout, but I wanted a Wicki-Hayden one. It looke like people typically use Max/MSP to handle the key remapping, but that seemed awkward to me. I wrote a little C program to do it, using OSX's CoreMIDI framework: github:jeffkaufman/jammer.

It looks for a MIDI device calling itself AXIS-49 USB Keyboard, attaches itself to that output, and then presents as a new virtual MIDI device to the system calling itself jammer. I had already done half the work (creating a virtual device) for my trackpad synth project years ago, and the other half wasn't too bad.

Unfortunately, when I got to mapping the notes I learned that mine won't switch into selfless mode. What's that? In the harmonic table layout there are multiple ways to play the notes, which means even though there are 98 physical buttons it will only produce 49 different MIDI note signals. You're supposed to be able to switch the unit into a "selfless" mode where it produces one value for each key by holding down "transpose down" while plugging it in (and a few seconds more) but mine won't do that.

Reading about the history of the device, it was originally introduced as something supporting harmonic table only. Then some people convinced the manufacturer to add support for "selfless" mode so they could use it with other layouts. This was made available to older units via a firmware update. But the readme says:

And, unfortunately, that does include my unit.

I'm still not sure what I'm going to do; it does work as-is, with half the potential range. I wonder if there'a a non-USB way to upgrade the firmware? I've written to the manufacturer to ask, though since they're not making it anymore they may not be able to help.

In the mean time, I've ordered another one that looks a lot more recent. I may end up selling the first one, or playing one with each hand.

(The seller offered to take it back, but that didn't seem fair to me since their listing was accurate and they'd been happy with harmonic table mode.)

Overall, I'm having a lot of fun playing melodies on it, and finding it super intuitive. I've been using it with my laptop and sforzando, but I'm nervous about using a multipurpose device for performance so I might end up putting something else together.