In my post about keeping dry food warm in school lunches I wrote that "The general rule is that hot food shouldn't be below 140F (60C) for more than two hours, because substantial bacteria can grow, and the closer it is to 100F (37C)the worse it is." Someone said they had heard 130F (55C) was the limit, and asked where this rule came from, and I read more about it.

Bacteria that's most dangerous to us generally thrive best around body temperature, so the farther you get from 100F (37C) the better. Food safety material generally describes this as a "danger zone", between refrigerator temperature and cooking temperature. This is what's represented in the FDA's Food Code:

Time as a Public Health Control: Time - maximum up to 4 hours:

It gives more detail in section 3-501.16's "The Safety of the Time as a Public Health Control Provision from Cooking Temperatures (135F or above) to Ambient":

FDA conducted in-house laboratory experiments to test the safety of the existing TPHC provisions of 4 hours without temperature control starting with an initial temperature of 135F or above. Clostridium perfringens was chosen to represent a worst case scenario pathogen for foods allowed to cool from cooking temperatures to ambient without temperature control, because its spores can survive normal cooking procedures, it can grow at relatively high temperatures (>120F) and it has a short lag period. C. perfringens spores were inoculated into foods that were cooked and then cooled to yield a cooling curve that would promote outgrowth as quickly as possible. The growth data suggest that the existing 4-hour TPHC provision will be safe for 6 hours after cooking, with the additional 2-hour margin of safety built-in for consumer handling.

There's a great chart in The "Danger Zone" Reevaluated by Frank Bryan, showing how long food can spend at various temperatures: 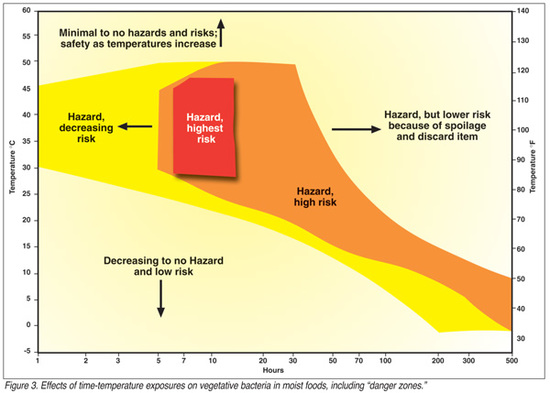 Since the time I care about is 4hr from packing to eating, even under the food code guidelines it should be safe if it starts at cooking or refrigerator temperatures. To be safe, though, I'm going to keep using the thermal mass thermos approach.