A thermos does a great job with liquids: the insulation means you can pour in hot soup in the morning, and enjoy hot soup at lunch. But it doesn't do nearly as good a job with solids: fill one with rice and it quickly falls into the "danger zone".

Update 2019-10-10: this is pretty conservative; more detail in this followup.

One recommendation you'll see is that you should fill the thermos with hot water, let it sit, and then swap the water for the food. This does help, but because the thermos doesn't have that much thermal mass it only helps some. What if we put a rock in the thermos to hold heat, and preheat it along with the rest of the thermos? How much does this help? Does this help enough?

The general rule is that hot food shouldn't be below 140F for more than two hours, because substantial bacteria can grow, and the closer it is to 100F the worse it is. My goal here is to be able to send hot dry food with Lily's lunch, and I pack it four hours before she gets to eat it, so the question is: what's the temperature two hours in, which is two hours before lunch time? If that's above 140F we're ok, if not we should figure something else out.

I ran an experiment on one cup of cooked rice, the kind of dry food you're not normally supposed to put in a thermos. I heated it in the microwave until it was steaming hot (it measured ~188F with an infrared thermometer): 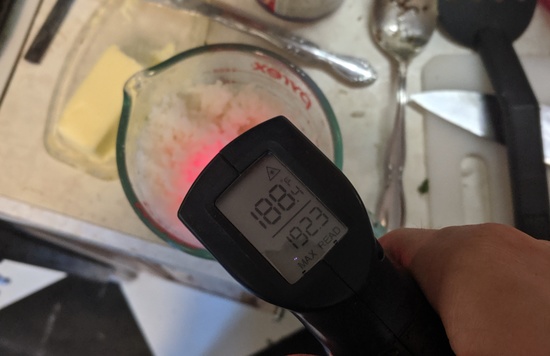 I tested this in three configurations:

After two hours I measured the temperature of the rice: The rock is clearly helping a lot, though it looks I should do the full T3 treatment with two rounds of boiling water in this particular thermos. 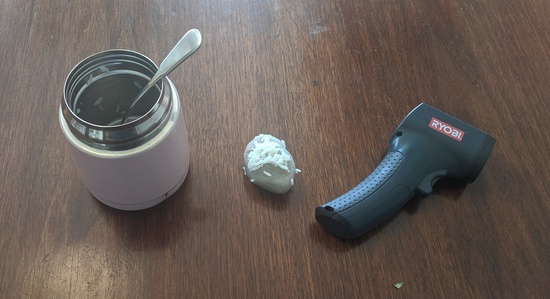 This works, but it is kind of hacky: rocks are odd shaped, hard to clean, rattle around, hide food, etc. How else could we solve this? Ideas:

Why isn't there a product designed to keep dry food warm? Am I just not finding it?

Follow-up: What is the real "danger zone" for food?