A group of relatively well-off people apply ideas from science to charity, trying to improve efficiency and end poverty. It doesn't turn out well. Sounds like something I should read up on.

There was a movement, starting around 1870, to replace municipal and religious aid to the poor with a system of Charity Organization Societies. Their rhetoric reminds me of today's effective altruism:

While in some ways they sound a lot like today's effective altruists, in other ways they're miles apart. They built Charity Organization Societies, which would carefully consider the situations of potential aid recipients to make sure that they were 'deserving' and to try to match the level of aid to the level of need. 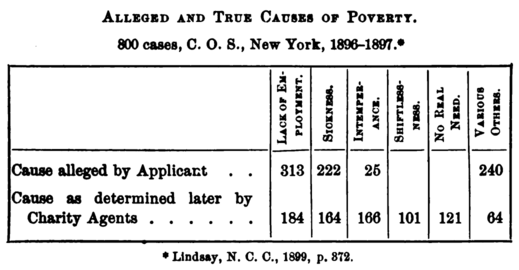 In his A Handbook of Charity Organization (1882), Stephen Gurteen wrote that some people should be helped:

But many should not:

They were especially careful not to be overly generous, because they wanted to make sure everyone did their share:

Give nothing (except in extreme cases), until a full investigation has been made, in order, first to discover to what class of unfitness the applicant belongs, and, this having been done to enable him, if he will, to do his share in the division of labor, or, failing this, to take his chance, unaided, in the struggle for existence. (Gurteen 1882, p204)

When they reference "unfitness" they're explicitly using the Darwinian sense of the term: this movement was part of what was later grouped as Social Darwinism. Gurteen (1882) has a chapter on "The Scientific Basis of Charity Organization" (p196-) where he describes their approach as coming from two main principles: survival of the fittest, and division of labor. His juxtaposition of humility and empiricism with the full confidence that the way to end poverty can be determined by armchair consideration is pretty striking:

It is true that the practical side of the work is that by which it will be judged by the public; and unquestionably, it is the practical results of the work which will decide in the long run whether Charity Organization is, or is not, the true remedy for Pauperism and all its attendant evils.

At the same time, it is well now and again, to examine the foundations on which the movement stands, and to see whether or not they will bear close and strict analysis; for it is self-evident that if the cardinal principles are laid deep down in the great laws on nature, and are not based on mere sentimentalism, even though at first it has to combat unthinking prejudice and unjust criticism.

The movement today is generally seen as having failed. The overhead in evaluating applicants is enormous, people don't like "friendly visitors" coming into their houses to investigate them, and the whole idea of deciding who is deserving has become distasteful. Plus their support of eugenics:

The doors of the hospitals and almshouses swing freely both ways, and the result is a succession of children, especially from half-witted women. These persons would have been able to have no children or few if left entirely without help, and would have been allowed to have none at all had they been properly taken care of. It is coming to be seen that the feeble-minded (a much larger class than many suppose) must have custodial care through life.

In general it may be said that the managers of charitable institutions do not sufficiently discourage marriage among the dependent and defective classes. The duty of being childless is not one they try to impose upon dependents.

Or, in the case of the Deaf:

The congregate system of education of the deaf has brought them together in a way calculated to promote extensive acquaintance, and sign language tends to make them a peculiar people. It thus comes about that the institutions for the education of the deaf become very definite factors in promoting the propagation of deaf-mutism through inheritance. The latest educational tendency, and one favored by Dr. Howe, is to abandon the sign language to a considerable extent, and to encourage as far as possible the education of the deaf in day schools. This tends to assimilate them with the ordinary population, and their defect is more likely to prove a bar to marriage [JK: !!] than under the conditions of boarding-schools.

With their emphasis on applying science and reason to charity they sound a lot like today's effective altruists, but their beliefs about what we should do are vastly different. Scientific charity (SC) tried to prioritize based on deservingness, while effective altruism (EA) tries to prioritize based on who will be helped more. These aren't completely disconnected: in the SC view helping an undeserving person would just encourage them to be less responsible, so they were kind of prioritizing based on how much they thought they could help people.

There are two main problems with the SC approach from an EA perspective. The first one is that, as a binary classification system they're going to miss important distinctions. For example, EAs will talk about how helping blind people with eye surgery is about 1000x cheaper than distributing guide dogs for similar benefit, and so donated money goes much further through surgery, but both groups are clearly deserving from an SC view.

The second problem is that EAs are generally consequentialist (outcomes focused), and deservingness is a deontological (rights or justice focused) concept. To many EAs, dividing the poor into deserving and undeserving groups just doesn't make sense. Even if we reinterpret ("steelman") deservingness to be about setting up incentives that give good outcomes, however, this idea that's central to SC is, to EAs, just one consideration among many in trying to figure out what will have the best effects.

Scientific charity and effective altruism also differ in their perception of indiscriminate aid. SC viewed charity that distributed food or goods without evaluating individual applicants, like a soup kitchen, as actively harmful, rewarding people for their poor choices; SCs [2] would try and prevent other groups like the Salvation Army from helping people this way. [3] EAs, on the other hand, generally think efforts like these are positive, just not always the highest priority use of funds or effort.

Another big difference between the two movements is their view of evidence. While both groups talk about having a scientific mindset, our standards of evidence are just much better now than they were over a century ago, with better statistical methods, tools like randomized controlled trials, and more people running studies. Having more and better data you might expect that EAs would be more confident in the charitable interventions they're favoring but, while the SCs write as if they're sure they've found the best system, EA writing typically is more cautious. EAs are very confident that the interventions they recommend are much better than some other interventions that they don't, but they also talk about how so many things are hard to evaluate and could potentially be more effective. Additionally, there's a forward-looking optimism in the EA movement about finding more effective options, where EAs emphasize a willingness to change your mind and in fact expect to change their minds about what most needs doing, that I don't see any of in SC writing.

Related to being more cautious, EAs are also much less confident that they know what people need better than they do. The SC system of friendly visiting was based on the idea that someone coming into the home of a much poorer family could relatively easily determine why they were struggling, including whether it was their fault in various ways, and what would help. By contrast, EAs generally have a very strong expectation that people know what they most need, and some donate to GiveDirectly for direct cash transfers because they think that even the relatively strong evidence behind deworming or malaria net distribution isn't enough to overcome that expectation.

On the other hand, it is really easy to think you're being much more scientific than you actually are. For example, there's not much evidence for which the best interventions to reduce animal suffering are. Initially many animal-focused EAs supported leafletting using estimates that traced back to very rough guesses by the people handing out leaflets that about 1% of the people receiving them responded by going veg. (pdf) People, including me [4], put too much weight on studies that didn't have control groups. (pdf) Even now, the 95% confidence interval on the effect of showing pro-veg Facebook ads in the best study to date includes zero. I would expect donating to the ACE recommendations to reduce animal suffering more than if you picked a random animal-focused charity, but I still sometimes hear animal-focused EAs talking as if we have a set of proven interventions we just need to scale up.

(Animal-focused EAs are generally aware of this, and this isn't their "fault" in any sense. It comes from having had decades of research into reducing poverty among humans, with basically nothing similar for animals. Human-focused organizations like GiveWell have a lot more to go on in making their recommendations.)

Overall, despite their rhetorical and ideological similarities, I mostly don't find the comparison between scientific charity and effective altruism worrying. The past errors of charity that EA is a response to do generally include the errors of SC. The main way I see the comparison as a warning is that EA could end up somewhere where EA continues to talk in a scientific way, confidence goes up, standards of evidence fall, and EA ends up pushing hard on things that aren't actually that important.

(When writing up a timeline of nonprofit evaluation for Wikipedia, Issa Rice learned about the Scientific Charity Movement, and Vipul Naik added it to his list of Wikipedia articles it would be good to create. At our "Wikiathon" I chose this topic, but writing for Wikipedia is so much slower than blogging that I only managed a three sentence stub. Ideally writing this will give me the motivation I need to finish the Wiki article.)

[2] I realize no one then talked about people in the Scientific Charity Movement as being SCs, but it makes it a lot simpler to write about.

[4] Wayne Hsiung of DxE convinced me that what I was interpreting as people changing their behavior in response to the ads was probably people clicking on them when they were already considering becoming vegetarian, and so we needed a real control group.