Julia and I have been tracking our expenses in a shared Google Doc since a bit before we got married. I thought it would be interesting to go back over these past 5 years and see how our spending has changed. A major effect on our spending is our living situation, so instead of breaking things down by calendar year I've broken them down by where and how we were living.

Julia and I had just gotten back from working at Pinewoods Camp for the summer. [1] We were living at my parents house in Medford MA, mostly just the four of us but during the summer my sisters and one of their boyfriends were staying here, bringing us up to seven people. I was working at BBN, Julia was working at Oxfam.

We moved out of my parents' house into a studio apartment in Cambridge, near Porter Square: 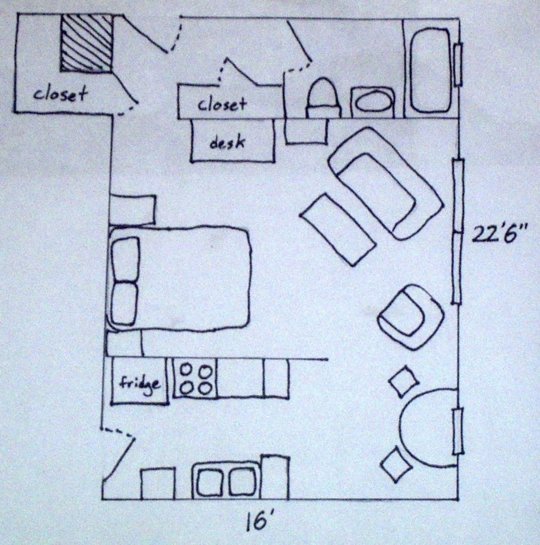 While living here Julia started working toward her Masters in social work and I moved from BBN to Cogo Labs.

A studio apartment turned out to be a poor fit for us: we want different amounts of social interaction which doesn't work well with only the two of us but isn't a problem in a larger communal house.

We moved to East Somerville, into a three bedroom apartment with another couple and their soon-to-be-born baby. I liked everything about this setup except the landlord.

When our lease expired we moved back to Medford to live with my parents again, saving money to buy a house. There were now more people living in the house than before: between seven and nine over these past two years. We had been hoping to buy sooner and move to our own place, but we haven't found the right house at a price we can manage yet, so we're planning to stay here until September and then rent something with friends.

During this period Julia finished her degree and started working as a social worker, and I switched from Cogo Labs to Google. There were no education expenses because Julia's degree involved pre-payment for tuition, but we are starting to have baby-related expenses. I expect these to go up in the future, once the baby is born.

These numbers can be hard to think about without charts, but because of their varying scales a single chart is kind of confusing. (Though it does show clearly that housing, taxes, and donations are our main expenses, with everything else being minor by comparison.) I've made category-specific charts, showing how our spending there has changed over time. 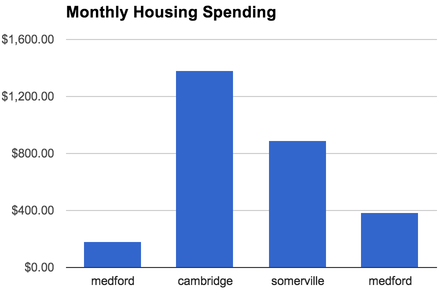 Our housing spending has been very variable. When we were living in Medford the first time we paid below-market rates, but when we moved to our own apartment in Cambridge we were paying market rates plus premiums for living close to the Red Line and having an apartment to ourselves. The Somerville apartment was more of a compromise, sharing with other people, being close to the (cheaper) Orange Line, and generally being in a poorer neighborhood. Since moving back to Medford we've paid approximately market rates, though the market for "single rooms in someone else's house" isn't very transparent. 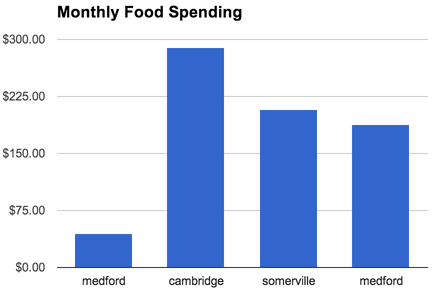 Our food spending has moved similarly to our housing spending. Initially in Medford we were paying less than we were costing in food, in Cambridge we paid a premium for preparing food just for ourselves, and in Somerville we were dividing food four ways. When we first moved back to Medford we tried to pay a more fair amount in food this time, though at this point I'm bringing home enough leftovers from work that I expect the household food spending would go up if we moved out. 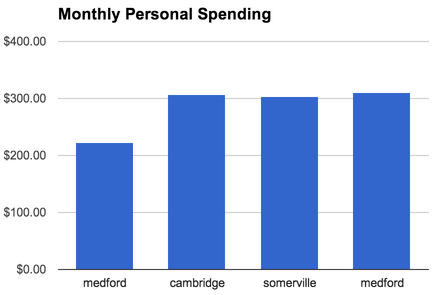 This is money that Julia and I get that we can spend however we want without consulting the other. We initially set this at $30, then raised it to $38, and recently decided to raise it to $45. The tradeoff here is basically between our long-term saving and short-term enjoyment. 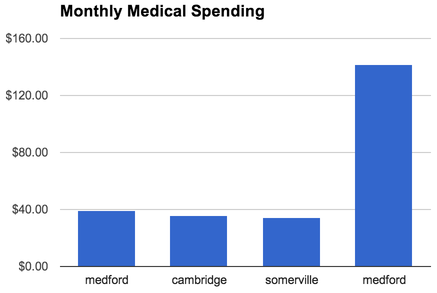 Our numbers don't include employer deductions, which means this chart does not include medical expenses deducted from my paycheck. We switched from a setup where work paid most medical costs with a deduction to one where we had a "high deductible" plan and lower paycheck deductions. This means the large change here doesn't reflect increased medical expenses so much as a change in how we pay for them. 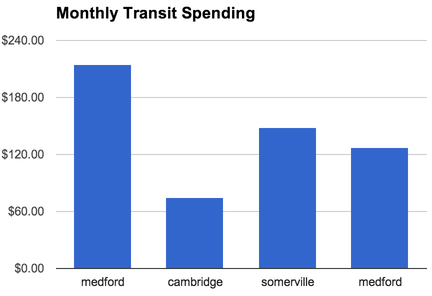 Transit spending varies depending on what we're paying for. It was highest initially in Medford because it includes me buying a new bike. Since leaving Medford we've both been commuting on the T which means buying monthly T-passes. When I was at CogoLabs and BBN they gave me T-passes, while when Julia was in school she needed a more expensive pass to get out to Salem. 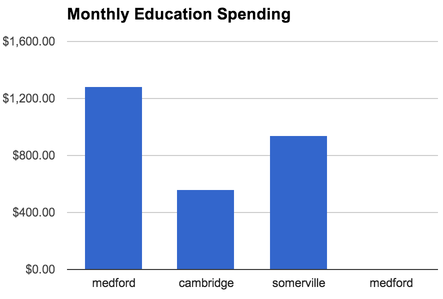 When we were living in Medford the first time "education" spending was me paying back my student loans, which I did ahead of schedule. The interest rate was low enough that it probably would have made more sense to invest the money and pay them back slowly over time, but I just wanted to get rid of the debt. The education spending in Cambridge and Somerville is Julia's social work tuition, books, and fees. 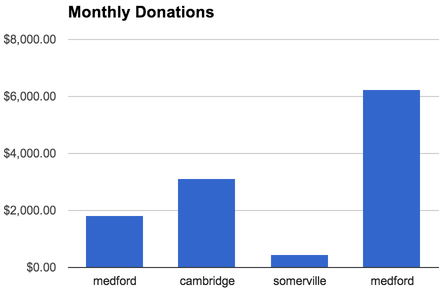 Our donations have been increasing as we earn more money and have more available to give. While living in Somerville Julia was in school, and so not donating, while I was earning stock options to donate later. 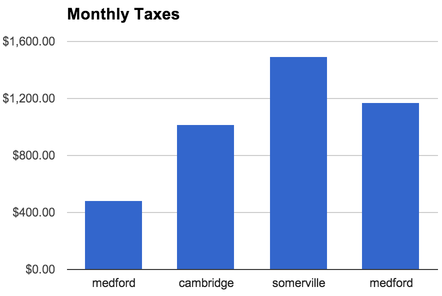 Our taxes are a little misleading here because while we've lived in Medford for 23 months we've only paid taxes once. This means the last bar should really be about twice as high. For the most part taxes are increasing as our income increases, though not as much as you'd expect because we donate a lot.


[1] At Pinewoods we had approximately $0 expenses because room and board was included and there wasn't much to spend money on.

←
Real Time Board Games You Asked?
→