At this point, one of the things I'm most concerned about with covid-19 is breathing air that has been recently breathed by other people. Six foot distancing would be pretty good if it quickly settled out of the air, but it's looking more like it can stay suspended in the air for extended periods.

The ideal is outdoors. Even on a relatively calm day, the amount of air flow outdoors is enormous compared to what you might get inside. A gentle 1mph breeze clears an 90-ft diameter circle in a minute. An aggressive level of ventilation indoors is about a quarter of that, and most places get far less. So the more we can move outside, the better: I think it's foolish that we have restaurants open for indoor dining when outdoor dining gets you most of the same benefit with much less shared air. Especially when considering that eating means people will have their masks off while talking. Similarly, while people definitely need to be able to buy food, moving grocery stores to a model of offering only outdoor pickup would be safer for both the customers and the employees then letting the public in.

The previous two summers my kids did an outdoor summer program in a park, where the only indoor component was bathrooms. It didn't run on rainy days, which would make it hard to plan around, but it's much more socialization for the level of risk than something indoors. Prompted by tuberculosis risk, 100 years ago, occasionally students would have school outdoors, even in the winter: 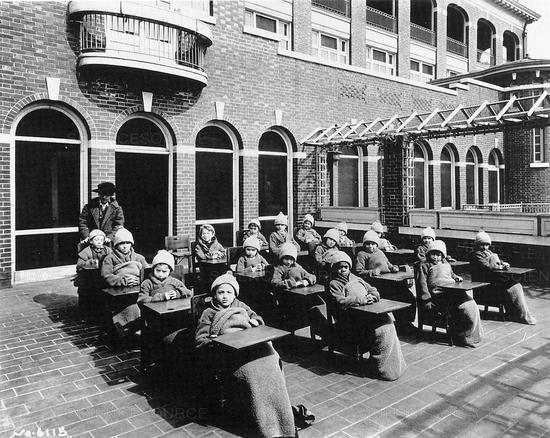 When things can't be moved outdoors, it's still possible to dramatically increase the level of ventilation indoors. Dance organizers and people who cool their houses using fans are familiar with this: put a lot of fans in windows, use some fans inside to stir up the air, and think through the path the air will take. The best case is, one side of a room has fans blowing out each window, with cowls, and the other side of the room has a set fans blowing in. For example, if you have a 900 sqft classroom with four 20-in box fans, you're changing over the air in the room approximately once a minute.

This doesn't work well in hard rain, and you're not going to be able to have the place much warmer or cooler than the outside, but it would still help a lot. Since you're inside, you could give people electric blankets in the winter.

I don't see reopening guidelines talking about really aggressive ventilation. For example, the CDC suggests considering opening windows, when they could be suggesting setting up fans in them. I also don't see any guidelines giving minimum ACH numbers.

In general, it seems to me that a lot of guidance is still heavily focused on surfaces, and not adapting quickly enough to we're learning about the risks of poor ventilation.