We just had a huge shift from people eating out to eating in, and now a lot more people are baking, so we and a lot of people I know have had trouble finding grocery stores with flour in stock. The residential supply chain is struggling to keep up with demand. On the other hand, the commercial supply chain is massively under-utilized: so many restaurants that had been buying 50lb bags of flour regularly are now buying none. What if those of us with households that go through a lot of flour bought some from commercial sources? Not only would we have flour, but there would be less pressure on residential supplies and so more for others as well!

I looked around, and I found that Webstaurant would ship a pallet of flour, 50 bags of 50lbs each, for $1,081 or $0.43/lb. I wrote to friends, wrote to work mailing lists, posted on FB, and found other people that were interested. Enough people wanted flour that I decided to place the order when it was only about half accounted for, since I was getting about 10 more people each day.

Unfortunately, between placing the order and them shipping it they ran out of stock: 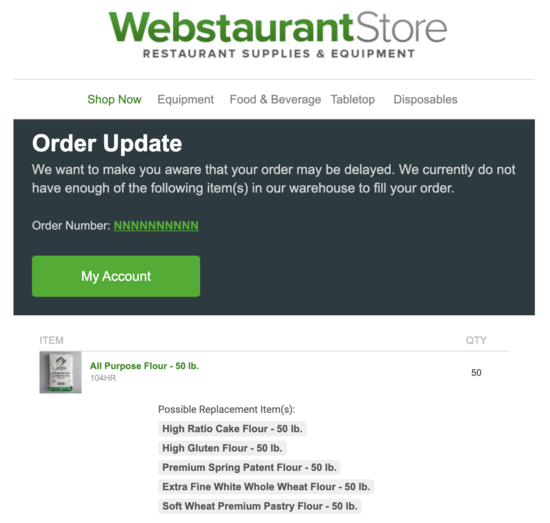 Not only were they out of the flour I'd ordered, they were out of all-purpose flour entirely. I considered ordering high-gluten flour, since a lot of people wanted flour for making bread, but bread isn't the only thing people cook and coordinating back with everyone would be a lot of work.

One of my coworkers pointed out that Baldor, a local specialty foods distributor, was now making home deliveries as long as you'd order at least $250 worth. Their flour was a bit fancier (King Arthur Sir Galahad, which is commercial King Arthur All-Purpose) and so more expensive, but their shipping was cheaper so it was still only $0.56/lb. I placed an order for 27 bags on Wednesday and wrote to people letting them know about the change and asking if they wanted to cancel their order; none of them did.

Thursday morning I set an old pallet out on our porch and put plastic sheeting on it, so I'd be able to fully wrap the bags. They arrived an hour later, and they were great about doing a fully contactless delivery. They carried the bags up, put them on the pallet, and left. 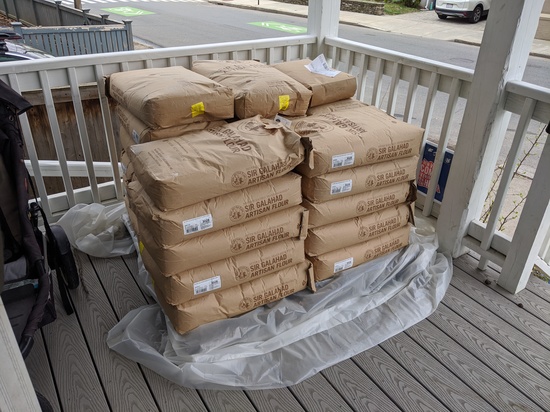 I wrapped the bags in plastic to keep them dry and keep animals out: 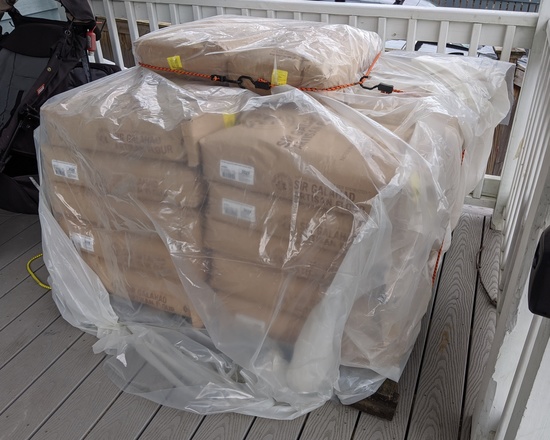 I told people they'd arrived, people paid me via paypal/zelle/check, and people started coming to pick them up. One thing I hadn't anticipated was how interested animals would be in the flour, and how inconsistent people would be about wrapping the bags back up again. Some people were great, but others weren't. I wrote to people again asking them to please pick up today if they could and to be careful about putting the plastic back, and moved the bags of people who said they couldn't pick up today inside.

As of this morning I still need four people to pay, and six people to pick up their bags, so we're in good shape!

←
Ethernet Is Worth It For Video Calls Why I'm Not Vegan
→