With the amount of buying from the commercial supply chain that we've been doing, I've been needing to divide up a lot of large containers. We typically use ziplock bags, and they're sturdy enough that they could be washed and reused. We mostly haven't been reusing them, though, because while I don't mind washing them they're a pain to dry. They're too flimsy to stay open by themselves, and if they get bumped shut they tend to stay shut.

I decided to attach some clothespins to the underside of the shelf above our sink to hang drying bags from. It was pretty quick. First I separated some clothespins, and drilled a small hole in the center of the half that still had the metal spring attached:

Then I screwed through it into the shelf above, making sure to use a screw short enough that it wouldn't poke through:

Once it was snug, I slid the other half of the clothespin back on:

Here are some bags drying: 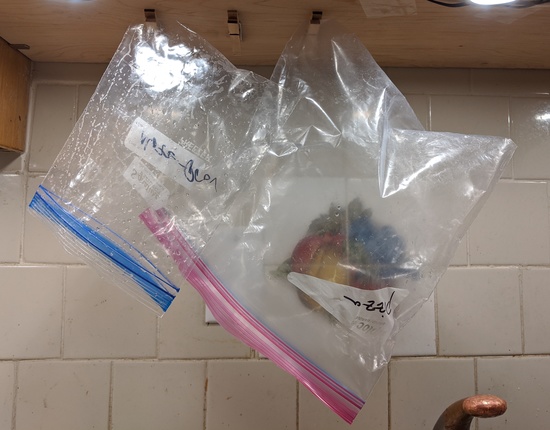