The comment section on most blogs is pretty minimal, with the real discussion happening elsewhere, but people who come to the post later won't see that discussion. One of the more unusual choices I've made with this blog is that instead of hosting comments here, I pull in and display comments people make on social media. While this started out as laziness (who wants to handle accounts for users?) over the years I've come around to thinking that this is how blog comments should normally work.

The biggest problem with this approach, though, is that it's in tension with the goals of the social media companies. Facebook, Twitter, etc want to keep you on their platform, and aren't especially interested in serving as the comment section of external blogs. On the other hand, this is potentially a really good fit for federated social media, and I've now made it so that ActivityPub replies to my blog posts will show up as comments here: 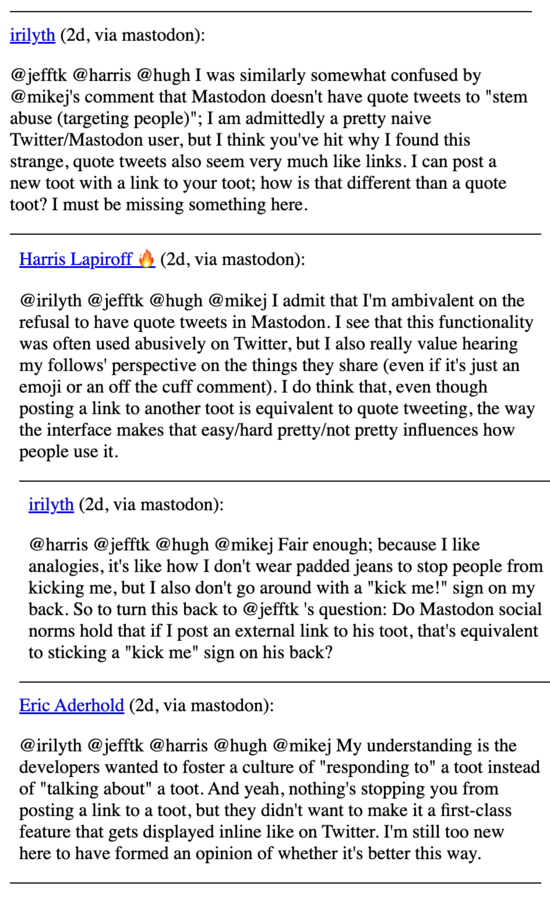 For a live example, here's a post from last week or you can look at the bottom of this post.

Integration was fast: if I fetch https://[server]/api/v1/statuses/[id]/context" I get all the publicly visible replies to that status that this server knows about. Then it's just a matter of extracting the relevant information, threading the responses, and fitting that into my existing comment display infrastructure (code).

This is a bit of a hack on top of Mastodon, but for blogs to participate directly in ActivityPub, where you could subscribe and comment over the protocol, you wouldn't have to implement most of what Mastodon does. That would make it much smaller, more efficient, and more maintainable. It looks like maybe someone has made a WordPress plugin for this? Has anyone tried it?