I have a cheap passive DI box I use to get a balanced signal out of instruments like keyboards which would otherwise get distorted signals on long cable runs. When the Free Raisins were on tour and I was using the DI box with my footboard we started getting horrible crackling noises. I put away the DI and planned to fix it when I got home. [1] Yesterday I got it out and looked at it:

There's a screw missing on the mic jack. This is bad: without the support of the screws the force of plugging in cables is going to get through to the solder joints on the circuit board, which are not strong enough.

Opening it up, here's the circuit board: 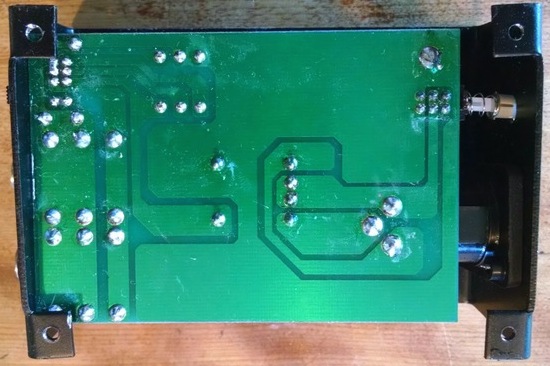 It's an incredibly simple design. On the left we have a pair of input jacks connected in parallel. Above them there's a switch to control how much atenuation you want, which just switch the signal between a no-resistance, medium-resistance, and high-resistance path. Then theres the transformer in the middle, which converts high-impedance unbalanced input into low-impedance balanced output. On the right we have the xlr jack where the signal goes out, and above that we have the "ground lift" switch that chooses whether the ground pin of the xlr cable gets connected to the ground of the DI box.

Let's look closer at the xlr jack pins, which I was already suspecting were the problem:

A good solder joint is smooth, but the center pin here isn't. There's a little circular crack around the lead. After using a soldering iron to reflow this joint, and the other two xlr joints just in case, we have:

[1] Which did cause a bit of a problem since we were planning to use it and didn't want to be hoping whoever was running sound would be able to provide one. We could have stopped off somewhere and bought one, but instead we did something kind of nuts. With the DI box our setup looked like:

Using the monitor mixer as a DI instead, we had:
←
SAT Coaching: What Effect Size? Sleeping in Darkness
→