Babies need ~11hr of sleep each night and tend to wake somewhat with the sun, so a common schedule is a bedtime around 7pm and then waking up around 6am. Talking to people about infant sleep they generally say to just get used to the baby waking up early and to adopt an earlier schedule for yourself. Julia is back to work, however, so an early schedule means almost no overlap with Lily's waking hours. Six is also a lot earlier than I would like to wake up, given the option. What can we do?

Any 11hr period should be about the same to Lily if she's given the time to adjust gradually, since at five months old she's certainly not telling time yet. We tried simply pushing Lily's bed time later, but she kept waking up at about six. We have good thick curtains on the windows but still enough light gets through that it stops feeling like night by ~6am. Perhaps she's just going to wake up with the sun?

So I put tinfoil on all the window panes: 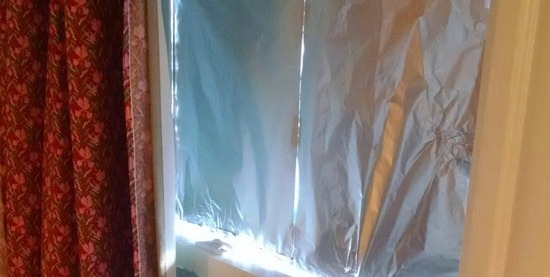 Now our room is as dark in the morning as it is at night. We can push Lily's bedtime back gradually so she and Julia can see more of each other, and I can sleep later in the morning. We're only a few days in but it seems to be working.