I've been a big proponent of box fan air purifier cubes, but they are bulky and fragile. If your ceiling is 8ft+, elevating them is an attractive option: 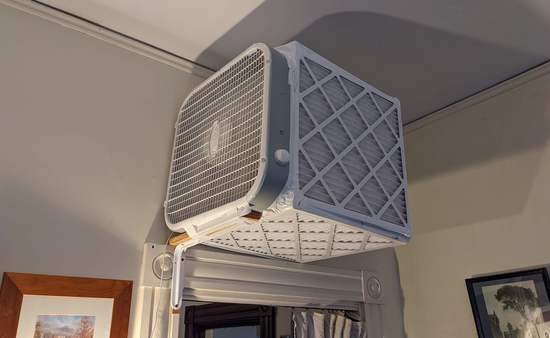 I made two of these for my dad's house this afternoon. The goal is for them to be out-of-the-way, and easy to turn on any time he has visitors.

The only heavy part is the box fan, since the rest of the cube is filters and tape, so the goal is to make sure the fan is well supported and not going to tip over. I used an angle bracket and a short length of wood to make a shelf under each fan, and then taped the fan to the shelf and wall. The filters are also taped to the wall. When taking them down I'll probably need to use a small amount of spackle for the holes, and touch up the paint if the tape takes some paint off, which it probably will. If I wanted to avoid having to tape anything to the wall I could have used two angle-bracket shelves each.

With an 8' ceiling you would want to have the cube flush against the ceiling, which gets you a tight-but-probably-ok 6'3" of clearance and three sides for filters. If your ceiling is taller, like these ones were, you can have a fourth filter on top while still maintaining reasonable clearance.