A few months ago I posted about making eggy crepes as a way to get the kids to eat more protein. Lately they've been interested in waffles, and I wanted to figure out how to make something similar. It turns out if you search for [eggy waffles] you tend to find people making waffles that have only slightly more eggs than usual. We can do better than that: Alternatively, use sour cream instead of yogurt and butter. As with the crepes, they taste a bit like eclairs, but that's not a bad thing and the kids like them a lot. 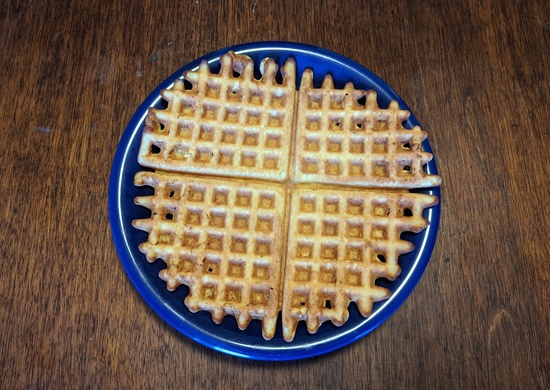 It's possible that they could use a bit less flour, but if you leave the flour out entirely they come out rubbery and won't crisp.

How much more protein is this? Here's the first recipe I found searching for [waffle recipe], which looks pretty normal:

These aren't the same size, but after normalizing both to 1,000 calories (sheet) the regular waffles have 22g of protein vs 41g (1.9x) in the eggy version. If we look specifically at lysine, the amino acid someone who mostly only wants to eat carbs is most at risk of being deficient in, it's 3.0g vs 1.1g (2.7x).

I was also curious how Eggo frozen waffles compare, since they have "egg" in the name. I count 23g protein per 1,000 calories, which is like regular waffles.