Since 2011, and monthly since 2013, I've maintained a map of Boston-area rents, scraping Padmapper. I looked at how they were changing over time in in 2015, but I have a lot more data now: 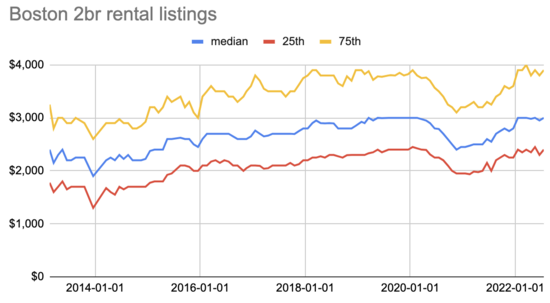 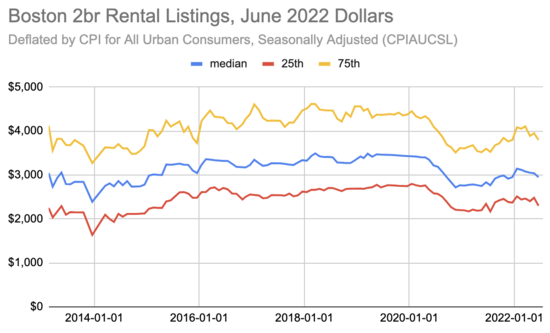 When I wrote near the peak of that increase, that I wanted to see lower rents I was hoping that we'd get there by figuring out how to let more people live in the city (build more housing!) than by fewer people wanting to live here (pandemics...). I guess I'm still happy to see rents no longer rising much faster than inflation, but this isn't the ideal way to do that!

I'm using 2br units here because those are the most common kind of unit, so we have the most information about what they tend to cost. For other sizes, instead of adjusting by inflation, let's adjust by the cost of a 2br. This lets us see how demand for various sized units has changed over time. Here are median listings for each size, as a proportion of the median 2br listing: 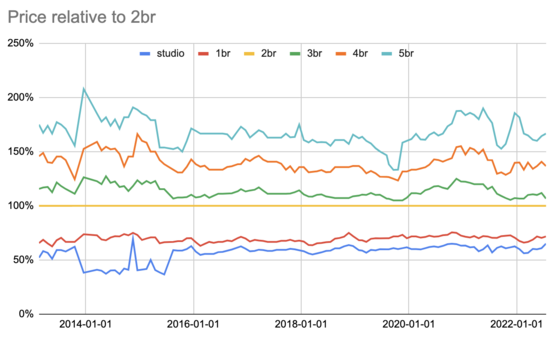 One thing that jumps out is that from late 2013 to mid 2015 units listed as studios were much cheaper than you'd expect. Looking back at the data I scraped (ex) I think the problem is that some listings that are probably for "a room in a shared house" have gotten mixed in: there are always a few mis-listed units, but during that period there are a very large number of "studios" listed well below typical prices (ex: $600/month, when Julia and I rented one of the cheapest studios we could find in 2010 for $1075/month).

You can also see that during the height of the pandemic 3br (and maybe larger) units rose in price relative to 2brs, though they did still fall some in nominal terms, probably because of people working from home and wanting more space.

Another interesting thing is that the price premium for a 3br over a 2br is low (~10%) compared to a 2br over a 1br (~40%) or a 4br over a 3br (~25%). I wouldn't expect to see a progression like this, so I wonder whether some of this comes from a larger fraction of 2brs being new construction? And so this represents a difference in unit quality instead of a difference in how much people value more bedrooms?

For 5br prices, I think a lot of the apparent volatility is just that there aren't very many listings for units that large. For example, this month (data) I found: 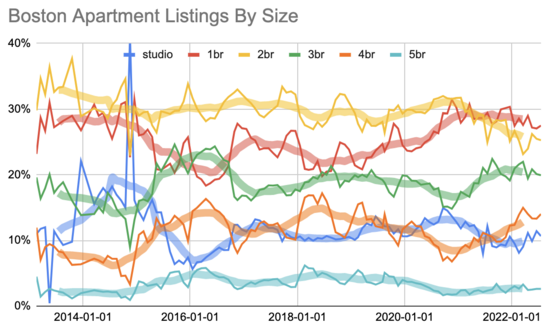 I suspect this is because you'll typically make more money using space that would support a 5br+ to build two smaller units, perhaps a 2br and a 1br, or selling it as a condo. Some of this is that families often prefer to own, some is that Somerville etc prohibit more than four unrelated adults from living together (though some groups might be able to get a poly domestic partnership), and some is that people are willing to pay a lot not to live with housemates.