A friend asked about the seasonality of Boston rents, wondering if there was a good time to look. Short answer: sooner is better. 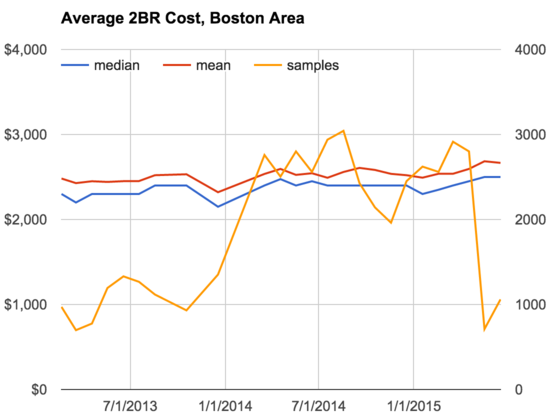 Both the mean and median rent are rising over time, going up about $100 or 4% per year. There doesn't seem to be much of a pattern for when in the year is cheapest.

About the data: I have 28 months of listings from Padmapper that originally come from Craigslist. This is for a rectangle that roughly represents what people seem to mean when they say "closer suburbs," reaching about half way out to route 128. You can see this visualized on jefftk.com/apartment_prices. Here I've calculated the mean and median rent from the 2-bedroom listings only. The number of listings does vary widely. I don't know whether it varies primarily because of people listing fewer apartments or something going wrong with Padmapper's scraping pipeline. I've excluded four months with very low samples from the chart above: 9/2013, 11/2013, 1/2014, and 2/2014.