In April of last year I started thinking about maybe organizing some sort of contra dance weekend in Boston. I've been to a lot of weekends playing with the Free Raisins and I thought it would be fun to bring this format to Boston. In early May I talked to Amy and Audrey, wrote up a description of what I was thinking, and started pitching it to JP and BIDA.

Dates were still up in the air, but looking for times when the Masonic Hall, Amy, and Audrey were all available, and avoiding conflicts with other events, the weekend of March 22nd looked best. I signed a contract with the hall and confirmed with Amy and Audrey in early June, and then sent out a progress report. This started a long process of getting feedback from people on specifics of the weekend, trying to make sure I was thinking about all the things people like and don't like in a weekend.

By late June I had booked most of the performers, with offers out to most of the others, and BIDA and JP Gender Free agreed to co-sponsor. I told both organizations that if there was a loss from the weekend that I would cover it—the idea being that if I'm the one risking the loss then I can make financial decisions without needing to convince two boards that they're fiscally prudent. I drafted a website and a registration form, and started sending them around for feedback.

In late July I sent out the following email:

I didn't actually end up booking an additional band or caller: there weren't people who I wanted to add closer to the time, and I thought three bands and four callers was enough.

I asked for naming suggestions and my memory is that Luke Donforth suggested Beantown Stomp. I registered the domain, and moved over the draft website.

Registrations trickled in, and by late January I was kind of worried. I posted:

Two months out and Beantown Stomp is ~60% full. I've been told this is a pretty normal sort of chart for anything like this, and that a lot of people tend to register closer to the time, but it would definitely make me more relaxed if people made up their minds and registered!

I started pushing it harder, getting our flyers distributed, writing to people who had RSVP'd on FB but not registered, and announcing it at more BIDAs. A month later we were pretty much full and a few days later I started putting people on the wait list. We ended up having ~50 registrations after opening the wait list, and because of people needing to back out or only coming for part of the time we were able to get pretty much everyone in.

(There were many people who would have registered but didn't want to join a wait list, so while this kind of sounds like "nearly everyone who wanted to come got to" that's not really what it means.)

After it became clear that we weren't going to lose money, I asked the Masons about renting an upstairs room for a few hours for workshops. We ended up with Nils leading a harmony singing workshop, and the Free Raisins leading a musicians workshop.

About a month before the weekend I learned we wouldn't be able to open the windows along the side of the hall because the neighbors were unhappy with the noise from Masonic Hall events. I was very worried about this, and concerned we would need to cancel, but a combination of opening the side door and a really big fan worked very well to keep the hall pleasant.

Overall I wasn't really wanting to delegate for this first time, because I wanted to make sure the first time went really well and really matched what I was imagining. Two of the biggest chunks I was able to delegate, though, were food to Persis and housing/transport to Sarah. They were both fabulous in taking these on fully and keeping me from having to think about them at all. Having people I trusted to just take the roles and run with it was critical, and was enormously helpful.

Money worked out pretty well, at about $15,670 or $85/person. We made some money, half of which goes to JP and BIDA (~$1,130 each) and the rest was divided evenly among callers, musicians, sound, and childcare. The numbers below are totals, and include profit sharing (PS).

We had 42 people fill out our survey. For the questions where people rated things on a scale of 1 to 5, we saw: 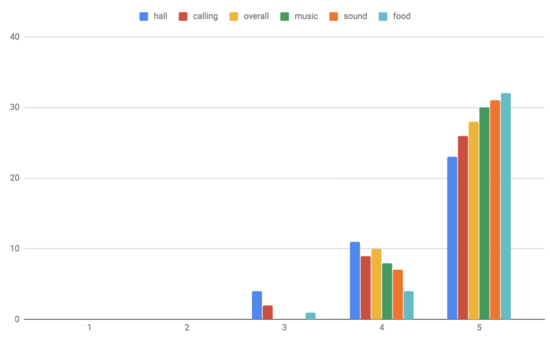 Here are some things I've learned: