The dance weekend is a month out, and we're filling up! In fact, if everyone who has filled out the registration form goes ahead and pays then we're pretty much full! [1] I suspect some people who started registration won't complete it, and we don't have a hard cap, so I'll probably start a waiting list in a few days.

Here's how things look to me right now:

That's a lot of unconfirmed dancers! Sixteen of them registered in the last week, a few have told me they're not sure yet if they'll be able to make it, but mostly I need to pester them about paying.

Here's the rate at which people have been filling out the registration form. This shows slightly lower numbers than above because when someone registers for multiple people with one form, which I see about twenty cases of) that's still only counted once: 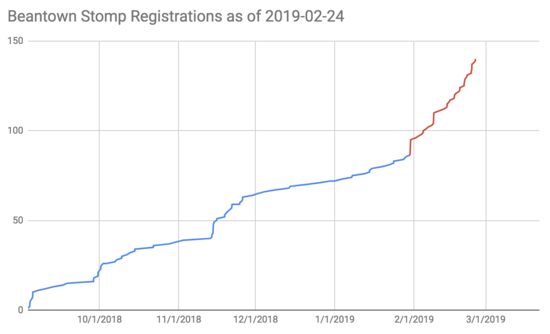 The switch from blue to red marks the point where I got worried about registration numbers and started pushing harder.

For the people who have paid, here are the amounts, from smallest to largest. The people paying "0" are volunteering: 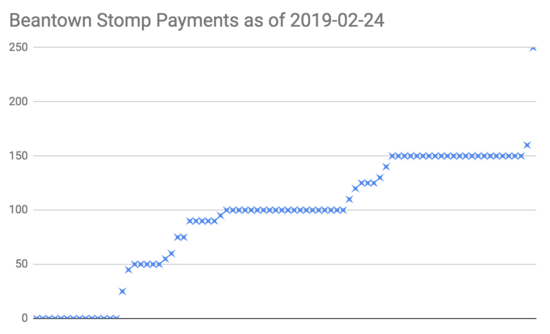 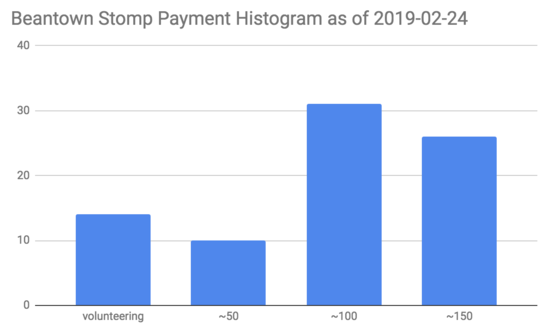 Current payments total $9,008, so we're on track to break even, even if later participants are generally able to pay a bit less than earlier ones.


[1] Not entirely sure what "full" should be. The Masonic Hall has a fire-code capacity of 392, but at that size there wouldn't be room to breathe let alone dance! In general we're much more limited by ventilation than floor space. I've been thinking 150, but it's possible that 175 or even 200 is ok. The most we've ever had for a contra dance there is 238 for an early Spark in the Dark, but that was in the middle of winter and back when we were allowed to open the larger set of windows, so we shouldn't go that high.