Last year we organized a new contra dance weekend, Beantown Stomp (retrospective). It sold out, and some people were frustrated that they didn't hear about it before we went to a waitlist. Since we're going to have a second one (March 20-22nd, put it in your calendar!) several people have suggested that we do a lottery this year. Looking at last years applications, however, I'm not so sure: 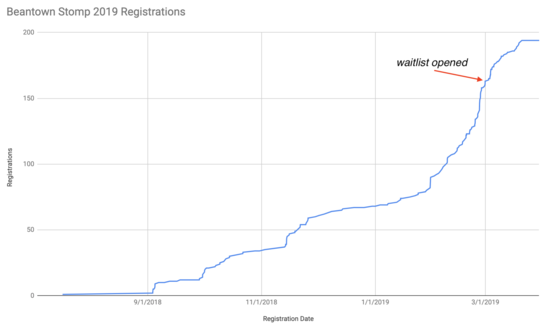 We admitted people first-come first-served and went to waitlist at the end of February for a weekend in late March. Everyone who applied before the weekend did end up getting in off the waitlist for at least part of it, though there were also people who would have liked to come who didn't try registering because they knew the weekend was sold out.

This year we're going to allow more people to attend, 250 instead of 200: there was no time last year where the hall was too full, and my worries about not being able to ventilate well enough were unfounded. So there should be less pressure on tickets, with more of them to go around.

So instead of jumping right in with a lottery, here's what I'm thinking: when we open registration the first 125 applications are accepted. Then if we get application #126 before registration has been open for a month, we pause registration and hold a lottery for the remaining 125 spots. This keeps the simplicity and immediacy of first-come first-served, unless demand is high enough that we need a lottery.

Thoughts? I don't know of other events that have done this: most have stayed first-come first-served until they start seeing all their tickets selling out right away, and then switched to a lottery. The hybrid proposal here is a way to get most of the benefits of both when you don't know which situation you're in yet.