I've now started working on the new bathroom (plans), so here's where we are while things are still fresh.

Last look at the old bathroom: 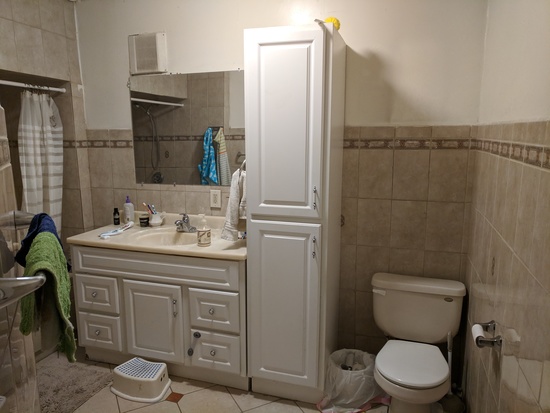 I was planning to start demolition on Saturday 1/5, so earlier in the week the plumber came by to remove fixtures and cap pipes. I broke the vanity down, and here's the empty room:

Here's a map of what I was planning: 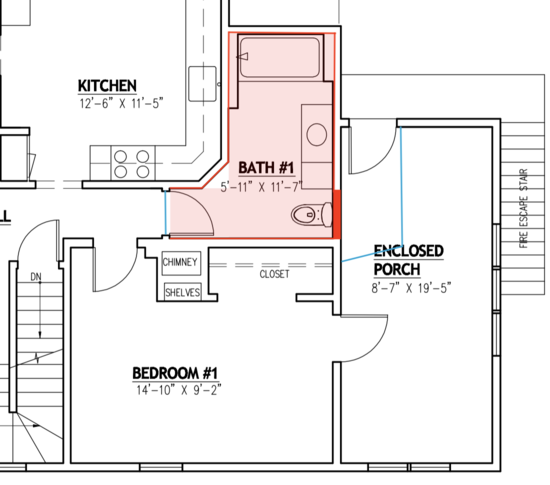 I left the ceiling alone, except in the tub alcove where there was a lower ceiling (boxed-in dead space).

The room is reasonably small so figuring out how I was going to get debris out as I went was an issue. I decided I'd start by cutting the opening through to the back bedroom, and then I would be able to carry things down the fire escape. 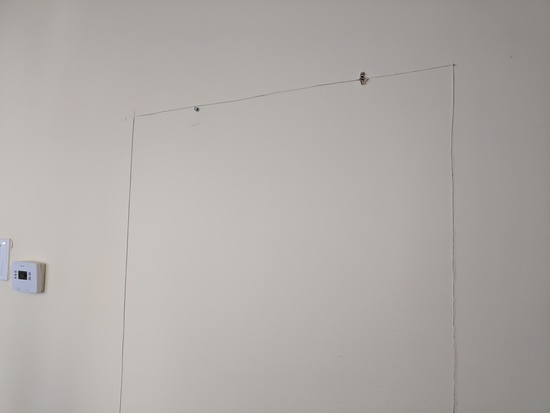 The night before I put up all the plastic sheeting, so I'd be all ready to start in the morning. The house is old enough that it probably has lead paint in the walls, and with small children I'd much rather put down too much plastic than too little. ( Julia's post on containing potential lead dust.) 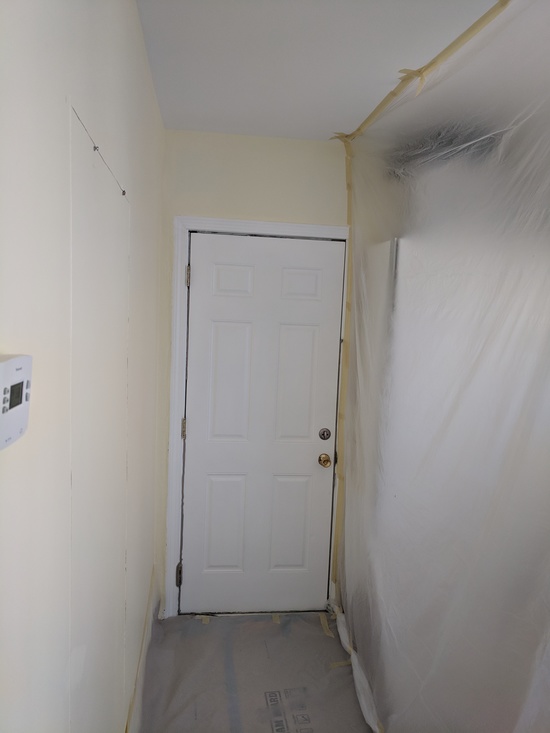 Since I want to keep this floor, that's 4mil plastic over cardboard.

Even though I was planning to take up the existing bathroom floor I still put down plastic there, because it makes cleanup much easier. This way when I finished taking down the walls I'd be able to get up the last of the dust and debris by just rolling up the plastic.

I turned off power to the room, and ran an extension cord from a section of the house whose power I was leaving on. I connected the bathroom fan, which vents directly outside, to the extension cord so the room would be under negative pressure and so leak less dust to the rest of the house.

The morning of I brought up all the tools I thought I could possibly need [1], and sealed myself in. I started working on making myself a way out, through the back. Here's a picture showing all the different layers I was working through: 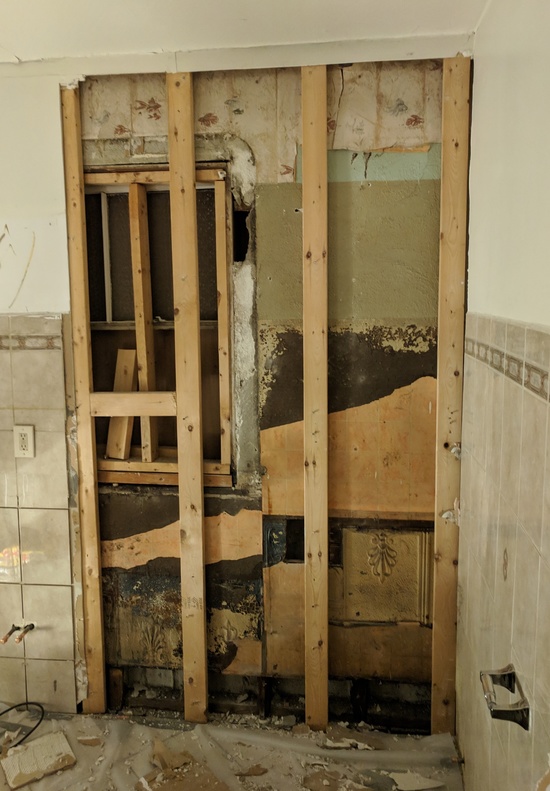 Here's another picture showing the layers in a different part of the room, with the opening I cut for a the new door on the left: 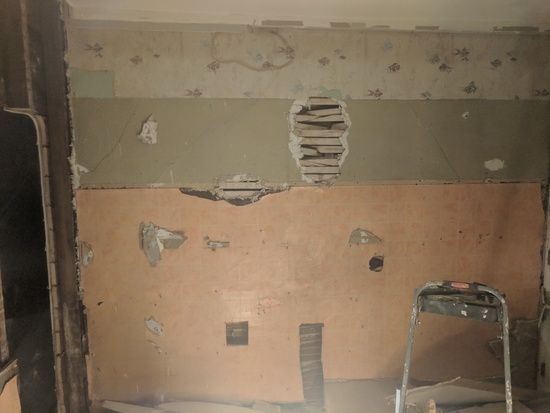 Phones make surprisingly good periscopes for looking in places it would be awkward to get your head into. I have a lot of pictures of the insides of walls now. 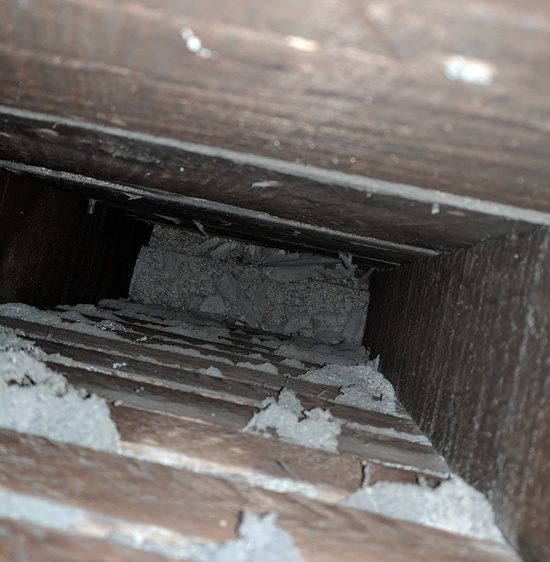 It's fun to see places where the house has been changed before. An old window covered over when the put on the rear addition: 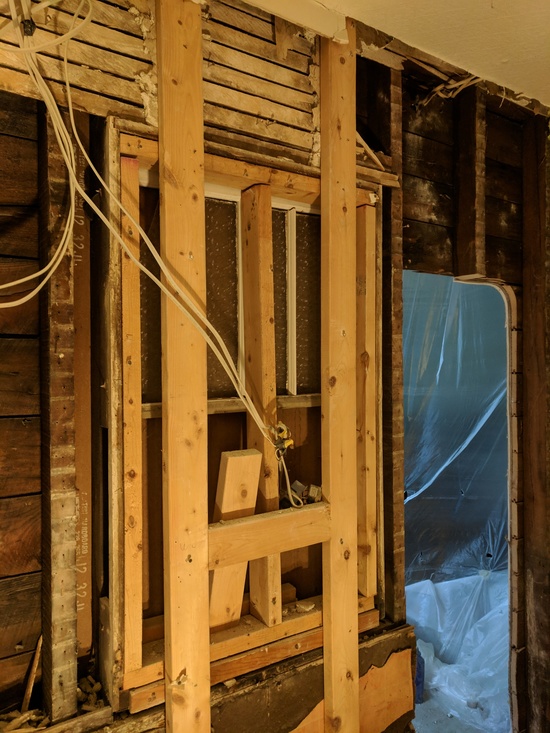 And a door that probably made more sense with a different internal layout: 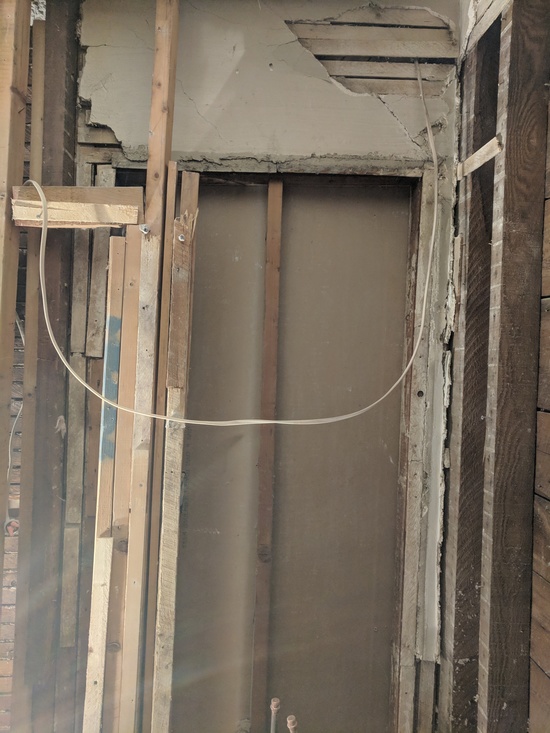 At the end of my first day of demo I'd taken down nearly all the walls, and still needed to do the tub and floor. My goal for the weekend was to finish demo, and I was on track for that.

One thing that's really frustrating with working on houses is that unlike with programming there's no reliable way to leave comments such that the next person to be working on something will see them. Though sometimes it happens: 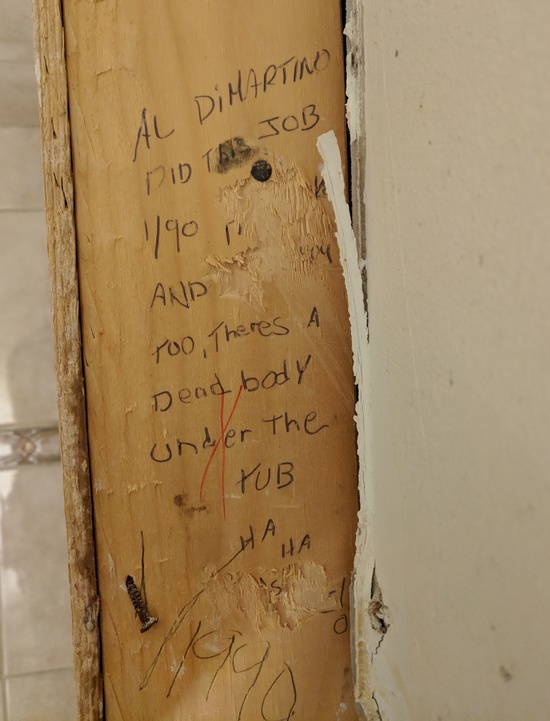 The tub was a fiberglass one in poor shape, and came apart reasonably well with the sawzall. Under the tub, though, it turns out there is about a four foot square area of dead space: 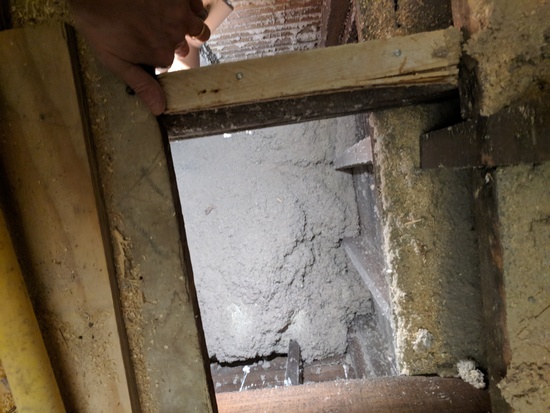 I hadn't realized the space was there, though with the way the back stairs up out of the basement work it makes sense. The bottom is full of insulation from when we had insulation blown in, and I'm going to need to go down there I think to insulate it properly. I don't know if there's anything we can use the space for; it doesn't integrate well with the floor plan of the downstairs unit.

Taking up the tile on the floor was a pain, just really heavy going with the sledgehammer. Each trash bag got only a small amount of tile, or else it would be too heavy to move.

Overall I used about 75 trash bags, most of them about as heavy as I could carry: 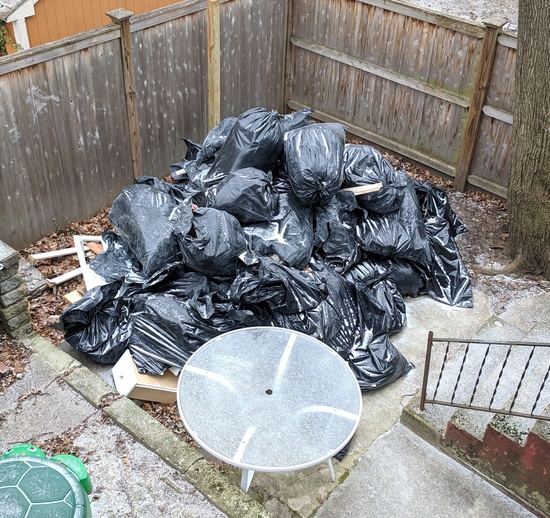 I hired people to take the pile away, and they said it was about 2.5 tons. (Which seems high to me; I would have guessed more like 1.5 or 2.)

Here's another panoramic view, now of the gutted room:

This meant I could now see the joists, which had been pretty badly treated by plumbing, with large notches: 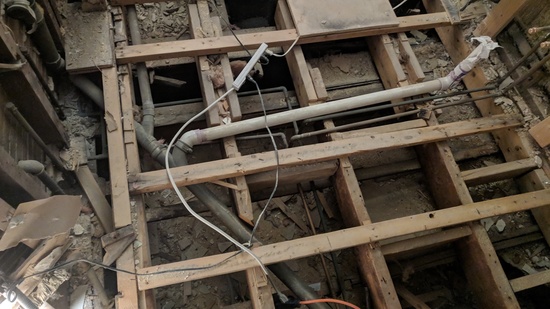 The worst of which is an enormous notch they made to have the toilet fall on a joist. 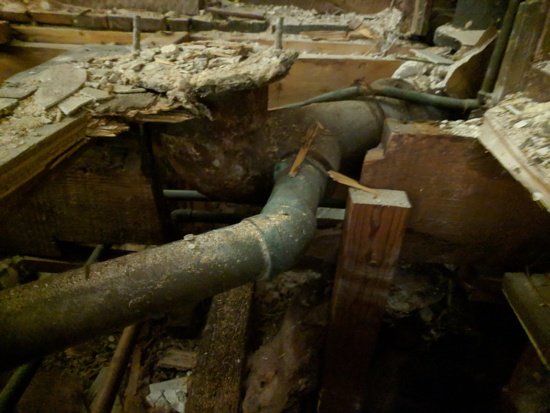 We're going to need to take all that plumbing out, and sister the joists. I was thinking I would sister them from bearing wall to bearing wall, but looking I wasn't able to find one. It looks like to make more room for a sink in the bathroom below someone took out four joists worth of load bearing wall.

The reason this didn't just make everything fall down is that the floor joists run the entire width of the house. They've bent some, but they're still holding. So the next step is to figure out how to support them. I had an engineer out on Saturday, and they're working on figuring out what sort of header I need, and what my posts down to the basement need to look like.

I did a bit more demolition, and it turns out there's dead space next to the chimney: 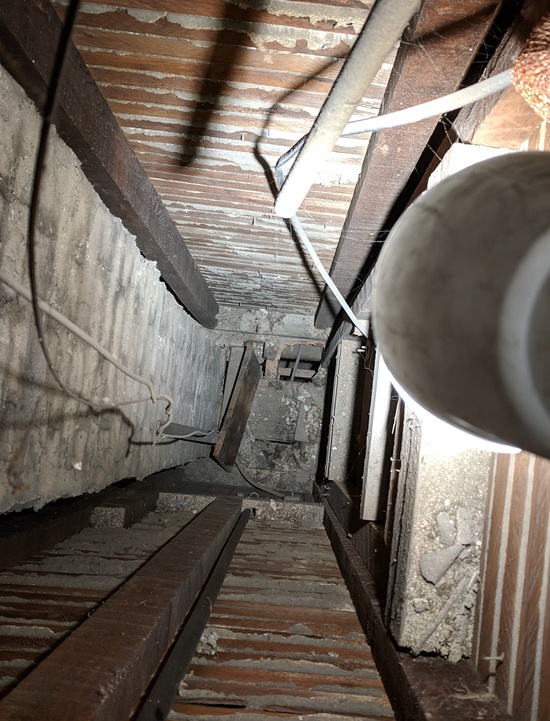 I don't really understand why it's there, but all the walls look like the original lathe and plaster. Maybe they were originally planning to build a wider chimney for a fireplace, and then didn't update their plans when fireplaces stopped being needed? (Public records say the house was built in 1920.) Open to ideas!

It looks like there's plenty of room, though, for me to run a column down to the basement through this cavity. I think I'll plan to just miss the central beam, brace against it going past, and then rest on a new footing in the basement. Checking with the engineer, I can build the column out of overlapping 2x4s, which means I can assemble it in place without any section being longer than the floor-to-ceiling height.

The header needs another support at the other end, though. I think I may be able to run one down along the plumbing stack, or through a closet on the first floor. We'll see!

It's also going to be tricky to get the header into place, because it needs to be one continous span. There are floor joists perpendicular above it, and a bathroom ceiling below it. I think, though, I can lower header on its side between a pair of joists, rotate it 90 degrees around the vertical into place, and then rotate it 90 degrees around the horizontal to orient it vertically. Depends exactly how long it needs to be; I'm going to need to do a bunch of measuring.

(Before taking up the floor I was expecting that there would be some joists that needed sistering, but not that there'd be no bearing wall.)